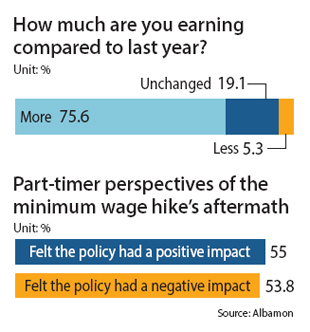 Four among five part-timers say they are earning more following the minimum wage hike this year, but as many as half also replied that they feel like the policy has had a negative effect.

Job search website Albamon conducted a survey of 2,044 part-timers to ask what has changed since the 16.4 percent minimum wage hike that went into effect in January.

Fifty-four percent of respondents said they were receiving the exact minimum wage, 7,530 won ($6.96) per hour, while 41.8 percent answered that they earned more than that.

Only 3.9 percent said they were receiving less than the legal minimum wage. The survey showed that by age group, teens had the largest proportion of part-timers that were paid under the minimum wage, at 9.1 percent.

A comparison between last year and this year’s figures showed that 20 percent of part-timers who received lower than last year’s legal threshold of 6,470 won per hour also earned less than the current minimum wage. On the contrary, only 2.7 percent of those that were paid above the minimum wage last year had now slipped below the threshold.

Survey participants were asked whether they felt that the policy was making a difference. Fifty-five percent responded yes to the question, “Do you sense any positive changes?” When asked about negative changes, a slightly smaller 53.8 percent answered that they had.

Nearly seven among 10 respondents that said they had experienced negative effects cited the difficulty of finding jobs because of a decline in the number of positions, which ranked first on the list of the policy’s downsides.

The second most popular complaint was that there are now fewer working hours available than before, with 44.8 percent. Thirty-eight percent of respondents said that they were seeing more tricks from store managers to expand break times or hire more part-timers and use them for shorter hours in order to cut down labor costs. This is because the current labor law states that employees that work less than 15 hours a week are exempted from welfare costs like severance pay.

Other downsides on the list included more intensive work (26.9 percent) and experience looking for a new job after being fired due to the minimum wage hike (11.4 percent).

On the contrary, 82.6 percent of respondents that said the minimum wage hike brought positive effects also said they experienced a rise in income. Second on the list with 51 percent was working less hours to earn the same amount. Increased concentration and satisfaction at work came in third (19.9 percent) and less pressure to work after office hours came fourth (14.1 percent).