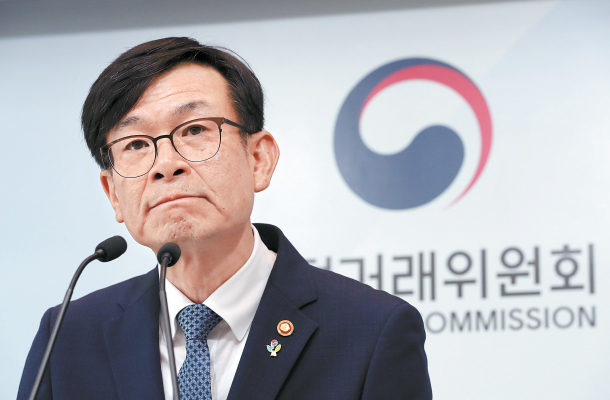 Kim Sang-jo, the head of the Fair Trade Commission, speaks on the first anniversary of his appointment as chairman on Thursday. [YONHAP]

Kim Sang-jo, the head of Korea’s top antitrust agency, raised his warning against conglomerates, stressing that the agency will investigate big companies that continue to hold on to nonessential affiliates.

“The practice of conglomerates giving work to affiliates is not only used in inheriting management rights [of owner families] through illegal means but also destroys the businesses of small and medium-sized companies and small merchants, and for that reason, needs to be stopped.”

“Is there a need for a conglomerate to own a real estate management company owned by the [conglomerate’s] largest shareholder?” Kim asked rhetorically.

“I honestly ask conglomerates to sincerely review if it necessarily needs these businesses that are owned solely by their controlling families.”

Kim said that, while the government can’t force conglomerates to sell the stakes that it has in these affiliates, the FTC can target chaebol that continue to operate within these governance structures by investigating them.

He said that if selling stakes is difficult, the family controlling the conglomerate should spin the affiliates out.

“We plan to make it clear that [the government] will no longer tolerate such practices through strict execution of the law,” Kim said.

The FTC chairman said that the goal of the antitrust agency in the last year was to create a fair and just society.

“One of the key projects that we focused on was reforming the gapeul relationship and coming up with measures according to the industry sector, whether it is between franchise companies and franchisees or between major retailers and suppliers,” Kim said.

Gapeul refers to the power dynamic between dominant and subordinate bodies.

He also said the FTC has tried to work on encouraging conglomerates to change their past management practices as well as corporate governance.

Since Kim took office, the number of businesses that control affiliates through a complex cross-shareholding system has fallen from 282 last year to 41 as of April.

“But we still have a long way to go,” Kim said. “At least I want to [prove] that we have started a change that is irreversible,” Kim said.

But one of the regrets he has is not being able to bring changes that the public can actually feel.

“The number of complaints that were turned in has increased significantly in the hope that we would be able to solve them to the point of satisfaction,” Kim said. “But some might have felt that it came short of expectations.”

Kim also said the FTC wasn’t able to strongly pursue its main role in revitalizing market competition as it was focused on conglomerate reform.

“[This year,] we plan to concentrate on improving regulations and implementing competition laws that would boost innovative growth and stimulate competition,” Kim said.