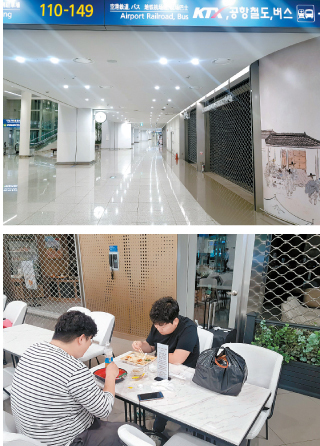 Above: The food court area of Incheon International Airport’s Terminal 2, where most restaurants close by 10 p.m. Below: Two brothers eat dinner at a convenience store after arriving to Terminal 2 late at night. [HAM JONG-SEON]

When two brothers returned to Korea late Monday night after a vacation to Da Nang, Vietnam, they were starving. But since none of the eateries at Incheon International Airport’s Terminal 2 were open, they settled for microwaveable lunch boxes from the terminal’s convenience store.

“We are eating convenience store food because we realized all the restaurants had closed by the time we arrived at Incheon Airport at 10 p.m. from Da Nang,” said the 31-year-old younger brother. “I didn’t eat the in-flight meal because I was sleeping, but we have to eat something now at the airport because we have a long wait before the bus to our home in Cheongju [in North Chungcheong] arrives.”

The brothers aren’t the only travelers despairing over the lack of late-night food at Incheon’s Terminal 2. The terminal’s food court has a total of 17 eateries and cafes, but most of them are only open between 6 a.m. and 10 p.m.

“We initially opened all night long, as requested by Incheon Airport,” said Choi Yoon-woo, a spokesman for food service company Ourhome, which operates Byeolmi Bunsik and several other eateries at Incheon Airport. “But we had to adjust our operating hours because of the lack of customers late at night.”

“Because there were very few customers at night when we first opened, we decided to just operate during the daytime,” said a spokesman from SPC, which manages Dunkin’ Donuts in Korea.

Now, the only 24-hour options across Terminal 2 are convenience stores and the fast food chain Lotteria.

At the busier and older Terminal 1, travelers face little difficulty in finding places to eat late at night. Eateries operated by Ourhome at Terminal 1’s food court take turns closing for two-hour breaks at night, while seven different eateries operate around the clock without a break.

The lack of nighttime traffic at Terminal 2, which opened in January, is the major obstacle discouraging eateries from operating late into the night.

Only four airlines - Korean Air, Air France, KLM and Delta Air Lines - operate at Terminal 2. The new terminal is often referred to as Korean Air’s private terminal, as the total number of passengers using the three international airlines doesn’t even amount to one-tenth of the number of Korean Air passengers.

Moreover, the lack of late-night traffic from Korean Air keeps Terminal 2 from being busy at night. Unlike low-cost carriers and international airlines that frequently run late-night flights, most Korean Air flights take off and land between 8 a.m. and 10 p.m., which are considered optimal hours for passenger convenience.

Incheon International Airport Corporation, aware of the criticism of Terminal 2, is now coming up with measures to improve services available at its newest terminal. The state-owned company spent over 5 trillion won ($4.62 billion) building Terminal 2.

“We are currently trying to increase the number of airlines that use Terminal 2 from four to 10,” said Lee Hee-jung, a public relations manager for Incheon International Airport Corporation. “When more airlines begin using Terminal 2, we expect airport facilities to become more active.”