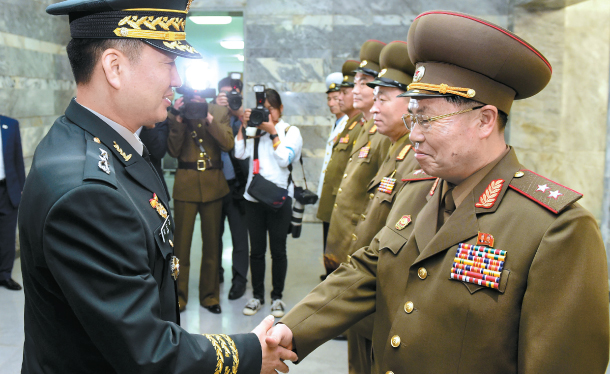 Maj. Gen. Kim Do-gyun of South Korea, left, shakes hands with Lt. Gen. An Ik-san of North Korea on Thursday at Tongilgak, a North Korean-controlled building in the border village of Panmunjom, before the first general-level military meeting between the two Koreas in over a decade. See story on [YONHAP]

South and North Korea discussed ways to ease tension on the border during a general-level military meeting Thursday at the truce village of Panmunjom, following up on an inter-Korean agreement signed by both countries’ leaders during their first summit on April 27.

Results of the meeting weren’t released as of press time, but South Korea’s Ministry of National Defense said both sides were in the process of drafting a joint statement, which meant talks were about to wrap up.

The meeting began at 10 a.m. in Tongilgak, a North Korean-controlled building in Panmunjom.

Both countries were expected to chiefly discuss the complete restoration of South-North military communication channels, the establishment of a direct hotline between their military leaders and the issue of holding military talks on a regular basis.

It was yet to be seen whether Pyongyang mentioned anything on the upcoming Ulchi Freedom Guardian joint exercise between Seoul and Washington, after U.S. President Donald Trump said Tuesday following his summit with North Korean leader Kim Jong-un that the allies would stop their “war games.”

Seoul made clear it would discuss the matter with Washington.

The recovery of remains of soldiers who fought in the 1950-53 Korean War was also anticipated to be discussed by both countries Thursday, as South Korean President Moon Jae-in said during his Memorial Day speech on June 6 that he wished to carry out the project with the North along the demilitarized zone.

It was the first time both Koreas held a general-level military meeting since December 2007, one that came on the heels of the Panmunjom Declaration signed between Moon and Kim at their first summit on April 27. In the declaration, both leaders agreed to “make joint efforts to alleviate the acute military tension and practically eliminate the danger of war on the Korean Peninsula.”

Both leaders agreed to frequently hold military meetings in order to “immediately discuss and solve” bilateral issues. As a first step, a general-level meeting was to be convened in May.

At the time, the regime blamed Seoul’s ongoing joint drill with Washington, the Max Thunder air force training exercise, as an “undisguised challenge” to the Panmunjom Declaration, and said it would “indefinitely suspend” the high-level meeting.

The high-level meeting was back on after Kim and Moon met for an unannounced summit on May 26.

Maj. Gen. Kim Do-gyun, who’s in charge of North Korea policy at South Korea’s Ministry of National Defense, led a five-member delegation to the meeting on Thursday, which included officials from the ministry, Joint Chiefs of Staff, Blue House and Ministry of Unification.

The North’s side was represented by five interlocutors led by Lt. Gen. An Ik-san.