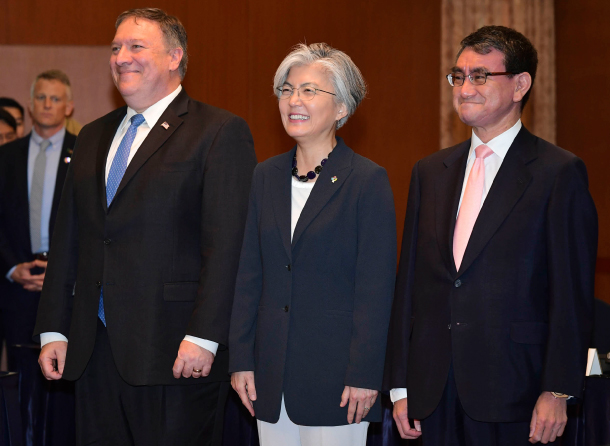 From left, U.S. Secretary of State Mike Pompeo, South Korean Foreign Minister Kang Kyung-wha and Japanese Foreign Minister Taro Kono pose for a photo before their meeting at the Ministry of Foreign Affairs in central Seoul on Thursday. [YONHAP]

South Korea is reviewing the suspension of joint military exercises with the United States, President Moon Jae-in said during a meeting with his National Security Council on Thursday, emphasizing that “flexibility” is needed in the process amid ongoing dialogue and trust-building with North Korea.

His remark was a response to U.S. President Donald Trump’s abrupt declaration that he would stop the United States’ “war games” with South Korea during a news conference in Singapore after his summit with Kim Jong-un on Tuesday. Trump called the exercises “expensive” and “provocative.”

Moon convened a meeting of the National Security Council on Thursday afternoon to discuss the outcome of the North-U.S. summit, necessary follow-up measures and the sensitive issue of the suspension of joint military exercises with U.S. troops.

On Trump’s remarks about halting the exercises, Moon said, according to the Blue House, “If North Korea carries out actions toward denuclearization and continues serious inter-Korean and North-U.S. dialogue to ease hostile relations, and in the spirit of trust-building as stated in the April 27 Panmunjom Declaration, there is a need for flexible change in military pressure against the North and there needs to be a serious review of South Korea-U.S. military exercises.”

Moon said such details need to be hammered out in close consultation with the United States and ordered his aides to follow up on the matter.

The issue of joint military exercises was not included in the text of the joint statement signed by Trump and North Korean leader Kim Jong-un during their summit on Tuesday, but the topic apparently came up during the two leaders’ meetings. Trump said in an interview with Fox News that “war games” would not be held “as long as we’re negotiating in good faith” with North Korea.

A source familiar with the matter told CNN that the idea to halt joint exercises likely came from President Xi Jinping, rather than Russian President Vladimir Putin as previously reported, and that this was one of the “many tools in the toolbox” that Trump took to his summit with Kim. The source described it as a “game-time decision” Trump made after sizing up Kim.

There are reports of mixed signals in the Pentagon about the suspension of joint military exercises with South Korea and the scope of what “war games” entails.

The White House indicated earlier that the U.S. military would continue to train and conduct smaller drills with South Korean troops but refrain from large-scale exercises.

Amid such reports, South Korea’s Ministry of National Defense said on Thursday that Seoul and Washington are in close discussion on the issue of suspending Ulchi Freedom Guardian.

“There are currently consultations on this issue happening under close cooperation between South Korea and the United States,” Choi Hyun-soo, a Defense Ministry spokeswoman, said on Thursday. “There are limits to what I can say in terms of the details.”

On whether Defense Minister Song Young-moo discussed the issue of suspending exercises with U.S. Defense Secretary Jim Mattis beforehand, she said, “It is difficult to directly confirm that matter…but it is an issue that has to be dealt with under close cooperation between South Korea and the United States.”

The South Korean Defense Ministry initially responded that it was in the process of analyzing the “exact meaning and intent” of Trump’s remarks on Tuesday. But Choi, when asked if this meant that there had been no prior consultation between the Defense Ministry and Pentagon on the matter, responded in an evasive manner. “Not necessarily,” she said.

Pyongyang has traditionally responded sensitively to the annual joint exercises conducted on the Korean Peninsula by South Korea and the United States, seeing it as training to topple its regime.

Ulchi Freedom Guardian is a computerized exercise simulating how the military would defend against a North Korean invasion and has included participation from Australia, Canada, France and the United Kingdom. Last year’s Ulchi Freedom Guardian exercise ran for two weeks in late August and mobilized around 50,000 South Korean troops and 17,500 U.S. troops.

At the beginning of the year, Trump and Moon agreed to postpone the Key Resolve and Foal Eagle exercises, two other large-scale South Korea-U.S. drills that usually take place in early spring, until after the PyeongChang Winter Olympics. This opened the door for Pyongyang’s participation in the Winter Games and a halt in nuclear and missile tests.

What followed was a period of detente on the peninsula, which paved the way for an inter-Korean summit at Panmunjom and the first North-U.S. summit in Singapore.

Early in the morning on Thursday, U.S. Secretary of State Mike Pompeo paid a courtesy visit to Moon at the Blue House and briefed the president on the summit in Singapore. The secretary told Moon that the event would not have been possible without the inter-Korean summit in April, while acknowledging that there was a lot of work left to do.

Moon congratulated Pompeo on the “success of the North-U.S. summit and Chairman Kim and President Trump signing a splendid joint statement.” He added that while there are many views on the outcome of that summit, “what is most important is the fact that it has allowed the people of the entire world, including the United States, Japan and China, to escape from threats of war, nuclear weapons and long-range missiles.”

A Blue House spokesman later said that Pompeo asked Moon to play a leading role in the process of denuclearizing North Korea through his close personal relationship with the North Korean leader.

Pompeo and South Korea’s foreign minister, Kang Kyung-wha, held talks later in the morning at the Ministry of Foreign Affairs in central Seoul, followed by a trilateral meeting including Japanese Foreign Minister Taro Kono and his delegation. Pompeo briefed them on the results of the Trump-Kim summit. This marks Pompeo’s first visit to Seoul since he assumed the post of secretary of state in late April.

After the meeting, the three ministers held a news conference together where Pompeo underscored that the “sequencing” of the denuclearization process of North Korea is clear, that “complete denuclearization” comes before any sanctions relief.

Kim “understands the urgency of the timing of completing this denuclearization,” Pompeo said. The statement came after Pompeo told reporters on Wednesday that the Trump administration would like to see “major” North Korean nuclear disarmament in the next two and a half years.

“The summit created this enormous historic opportunity for us to move forward together,” he said, “and fundamentally reshape the relationship between the United States and North Korea. Verification is central to that.”

“Let me be very blunt,” he added, “President Trump has been incredibly clear about the sequencing of denuclearization and relief of sanctions. You get complete denuclearization. Only then will there be relief from the sanctions.”

His remarks apparently rejected a phase-by-phase approach to denuclearization that has been favored by the North as it seeks relief from crippling UN Security Council sanctions. He indicated that the sequence is different from past administrations that rewarded North Korea prematurely.

The former director of the U.S. Central Intelligence Agency, who has been at the forefront of the preparation for a summit with Kim, continued, “The world should rest assured that the United States, the Republic of Korea and Japan remain committed to achieving the complete, verifiable, irreversible denuclearization of North Korea.”

The four-point statement signed by Trump and Kim said that the North Korean leader “reaffirmed his firm and unwavering commitment to complete denuclearization of the Korean Peninsula” but did not include the terminologies “verifiable” and “irreversible.” Pompeo once more affirmed that the Trump administration stood by so-called CVID, or complete, verifiable and irreversible denuclearization.

Pompeo and Kang also downplayed concerns about the halting of joint military exercises and emphasized instead that the U.S.-South Korea alliance is “absolutely ironclad.”

Kang said during the joint press conference with Pompeo and Kono that she hopes to continue cooperating and consulting with Washington and Tokyo “for the complete denuclearization and permanent peace of the Korean Peninsula.”

“Secretary Pompeo and I reaffirmed that the Republic of Korea-U.S. alliance, which celebrates its 65th anniversary this year, is robust as ever,” Kang said, “and that the U.S. Forces in Korea has played, and will continue to play, a crucial role for deterrence and peace and stability on the Korean Peninsula.”

Her remarks on the U.S. Forces Korea could be interpreted as a response to concerns following Trump’s news conference on Tuesday that there might be a reduction or withdrawal of U.S. troops from South Korea in the process of a nuclear deal with the North. While Trump has said he did not discuss the matter with Kim, he did say during the post-summit news conference that scaling back U.S. troops on the peninsula is something he would eventually like to do, for cost reasons.

Kang said the issue of halting military exercises is one “between the South Korea-U.S. alliance and involves consultation between our military authorities.”

Pompeo was scheduled to travel to Beijing later in the day to brief Chinese Foreign Minister Wang Yi on the summit.