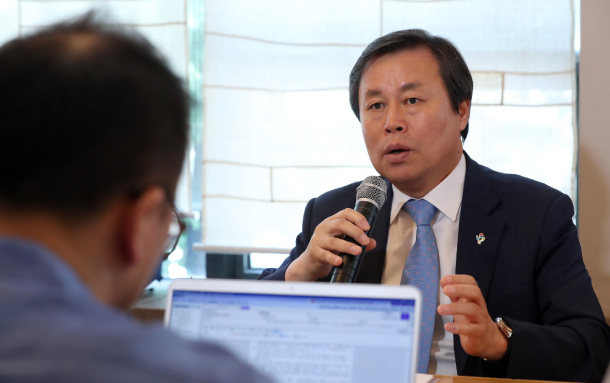 Do Jong-hwan of the Culture, Sports and Tourism Ministry talks to reporters during a luncheon on Friday in central Seoul, marking the one-year anniversary of his appointment. [MINISTRY OF CULTURE, SPORTS AND TOURISM]


It’s been a year since Do Jong-hwan became the leader of a Culture, Sports and Tourism Ministry suffering from controversies as far ranging as the cultural blacklist to the Me Too movement scandals.

“We’ve really tried to normalize the ministry that has been precarious for the past few years,” said Minister Do during a luncheon he held on Friday with local reporters to celebrate his one-year anniversary. “I believe we’ve achieved that goal, but we will continue to root out these practices within the ministry.”

Regarding the Me Too movement that took the country, especially the arts and culture worlds, in storm, Do said that the ministry will set up a department dedicated to dealing with sexual abuse cases. According to Do, there’s no other ministry yet, outside of the Ministry of Gender Equality and Family, that has established a similar department. A counselling expert will be hired to head the department.

Above all, the minister emphasized that it is the Culture Ministry that needs to work to help the public achieve work-and-life balance.

“According to a recent poll about the new 52-hour workweek, most people responded that they’ll spend the extra time that they will get on traveling,” said Do. “What came second was spending time doing cultural activities like watching performances and attending exhibitions. And coming in fourth was spending time enjoying sports.”

“As you can see,” Do continued, “the result shows that the Ministry of Culture, Sports and Tourism have a lot to do to allow people to really feel that they have a balance between work and life.”