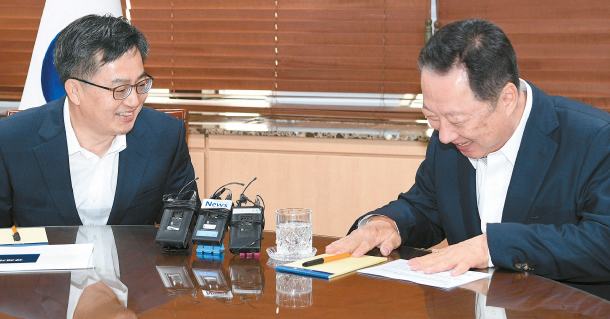 Park, the leader of the lobbying group that represents conglomerates, made the comments during a meeting with Finance Minister Kim Dong-yeon on Friday.

“I have been the chairman of the commerce chamber for more than four years, and we have made 23 requests for regulation reform and 15 more requests in other forums and discussions,” Park said. “It is now time to focus on solving those requests rather than on finding more regulations that need reform.”

Park stressed that these regulations were obstacles holding back innovation.

The finance minister said that, although the government will push forward with changes to regulations that are blocking innovation, it will adopt a two-track system and take a more cautious approach to contentious regulatory issues.

“We will solve those issues that are in need of being solved, but we will also be working on trying to solve problems in areas where it can’t be solved by sharing the reasons behind it,” Kim said. “In the process, if there are those who suffer damages due to regulatory reform, we will provide appropriate compensation.”

Kim is currently focusing on innovative growth and has recently clashed with the Blue House over the effects of the increased minimum wage.

While the Blue House believes that the minimum wage hike has had a positive impact on the economy, Kim raised concerns over job losses and cuts to low-wage workers’ incomes.

The finance minister said that the government should reconsider the speed of its increases to the minimum wage.

On the eve of his first anniversary as the head of Korea’s Finance Ministry, Kim held a meeting to discuss practical measures in speeding up innovative growth, including introducing measures to get 350,000 electric and 15,000 hydrogen cars on the road by 2022.

On Friday, the Finance Ministry announced a plan to launch an innovative growth center that would work jointly with the private sector.

“In the second half of this year, we need to come up with visible results on the eight pioneering industries and regulatory innovation,” said Vice Finance Minister Ko Hyoung-kwon during a meeting.

Ko will lead the center, which will consist of four task forces, including a regulation innovation team and an innovative start-up team. The center will also have experts from the private sector and corporate officials as team members.