KIM NAM-JUNG
*The author is an editorial writer for the JoongAng Ilbo. 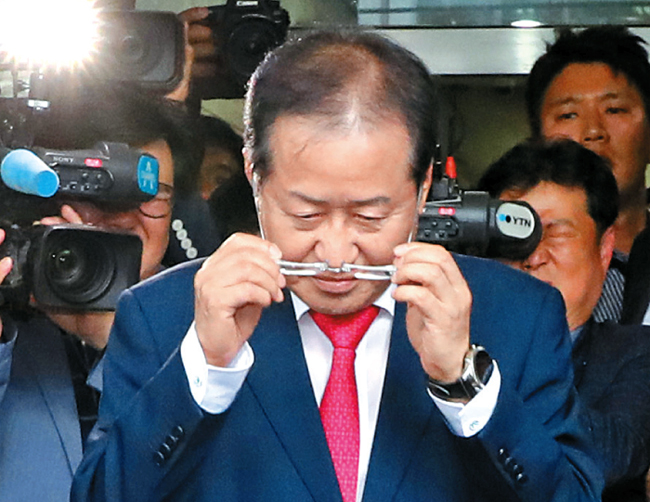 “Dewey defeats Truman,” read the headline of Chicago Tribune the morning after the U.S. presidential election in 1948. But the president-elect was not Thomas Dewey of the Republican Party but Harry Truman of the Democratic Party. A famous photo shows Truman with a big smile on his face while holding the newspaper that has just printed its worst error. It is an unforgettable moment in U.S. political history.

In opinion polls, Truman had never beaten Dewey. Two months before the election, he was 13 percent behind, and two weeks before the election, he was 5 percent behind. Even Truman himself thought that he would not win and went to sleep. That’s why newspapers erroneously announced his defeat. But the outcome was a surprise. Known in Korean as the ‘Truman Effect,” this effect explains how a candidate who was behind in opinion polls may win despite predictions.

Hong Joon-pyo, head of the Liberty Korea Party who was crushed in the local election, seemed to have hoped for this Truman effect. Opinion polls showed that the party would lose in all areas except Daegu and North Gyeongsang, but he claimed that its candidates would win in the five Yeongnam regions, which are Busan, Ulsan, Daegu and North and South Gyeongsang, and the metropolitan gubernatorial and mayoral races in South Chungcheong, Daejeon, Gangwon and Gyeonggi.

But there was no surprise. It was an unlevel playing field, but he has nothing in common with Truman in the first place.

After the exit poll, Hong posted on his Facebook, “The buck stops here!” Interestingly, it is also Truman’s motto. It means that one would assume all responsibilities. Truman had a sign with the phrase on it sitting on his desk in the Oval Office. He had to make many historical decisions, such as dropping atomic bombs on Japan, the Truman Doctrine, the Marshall Plan and entering the Korean War, and he was determined that he would not avoid accountability.

The expression originates from poker, where the “buck” is the marker indicating the dealer. Not passing the buck would mean not handing over responsibilities. Hong resigned and said that he assumed responsibility for the crushing defeat. When he was faced with reform demands as the head of the Grand National Party in 2011, he cited the same expression. Politics is ever-changing, and he may again return to deal the cards. At any rate, no one wants to hear him mentioning the buck rhetoric again.