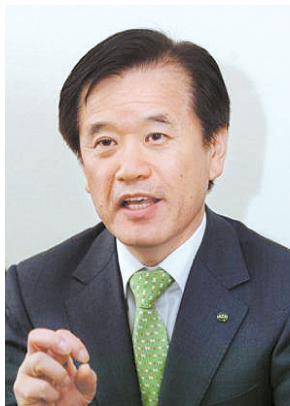 Attention focused on whether the federation would dismiss Song, but no conclusion was reached during the session.

Last month, the federation, which represents employers, released a statement that echoed claims by Korea’s umbrella labor unions on the revisions to the minimum wage. Song was found to be behind the pro-labor statement, and the company released a new statement the next day.

The federation released a vague statement on Friday saying that its top leadership “reached a consensus that quick action is needed in order to patch up the recent feud.”

Industry insiders believe the call for “quick action” is a request for Song to step down voluntarily. Song, however, said he wouldn’t step down and that he didn’t do enough damage to the organization to be dismissed.

A source that participated in the meeting told the JoongAng Ilbo that the organization is giving Song some time to voluntarily step down rather than dismissing him.

Some linked Song’s past career at the Labor Ministry to his support for union positions.

Song started working at his house rather than the federation’s office in Seoul early this month. Speculations grew that the relationship between Song and the organization has deteriorated.

On Monday, Song went back to his office to work, but the federation’s chairman, Sohn Kyung-shik, suspended his position.

Song was inaugurated on April 10 to serve a two-year term.