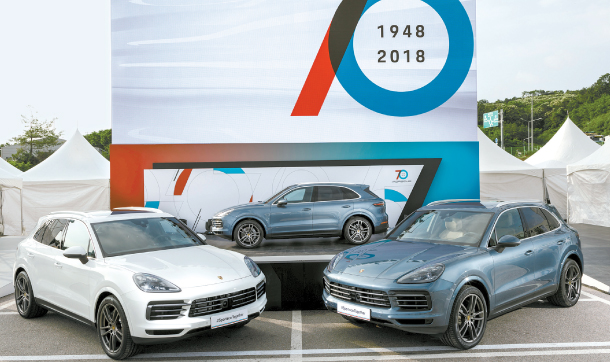 German automaker Porsche unveiled the third generation of its Cayenne SUV on Friday. The fully-revamped model will hit Korean roads in November.

Porsche has sold more than 760,000 of the SUVs since its launch in 2002. The Cayenne quickly became one of the best-selling models, which had previously focused on sports cars.

The revamped Cayenne’s design is based on Porsche’s signature 911 sports car and gives off a sporty demeanor.

The new Cayenne’s 3-liter turbo V6 engine produces 340 horsepower and 45.9 kg.m of torque. According to the automaker, it takes a mere 6.2 seconds for the SUV to reach 100 kilometers (62 miles) an hour. Despite being an SUV, it can reach a top speed of 245 kilometers an hour.

Porsche’s Cayenne and its competitor, the Range Rover Sport, are two of the most popular luxury SUVs in Korea.

Michael Kirsch, the head of Porsche Korea, said that the company will continue to invest in the Korean market.

Porsche Korea also held a 70th anniversary event on Friday where it displayed important models from its history, such as the Porsche 550, 959 and the 918 Spyder.

Porsche held the event, which it calls the Sportscar Together Day, across the globe.