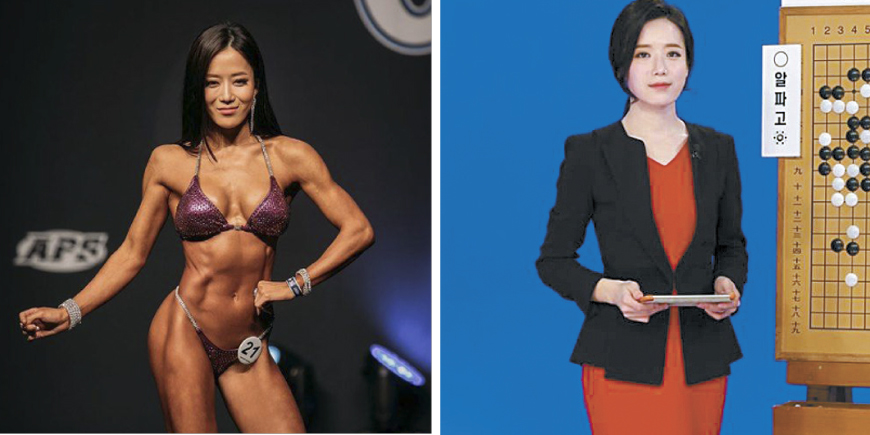 Kim Yeo-won, a commentator for baduk, also known as Go, is living a double life as a fitness queen.

The 31-year-old commentator, best known for reporting on the 2016 match between Korean grandmaster Lee Se-dol and computer program AlphaGo, has begun competing on the bodybuilding stage. Last month, she won second place in the bikini competition at the Olympia Amateur Asia Grand Prix, one of the world’s biggest bodybuilding competitions.

“Baduk and exercising are similar in that they both make you push yourself beyond your limits,” Kim said during an interview with the JoongAng Ilbo, where she spoke about fitness and baduk. Below are edited excerpts from the interview.

Q. How did you get into fitness?

A. I didn’t use to exercise much, but I started getting personal training in November 2016 to improve my stamina. Someone suggested that I prepare for a bodybuilding competition last March, and I’ve been going hard at it ever since.

What do you find attractive about exercising?

Exercising is really a cycle of confronting your laziness and appetite. I liked achieving these simple goals. I also feel a sense of accomplishment as I see myself grow one step at a time.

It’s different every season. At first, it was very difficult to control my appetite and monitor my food intake. Gradually intensifying my workouts for a fitter body was difficult as well, and the idea of showing my scantily clad, tanned body at competitions was horrifying. I was so against the idea of tanning that, when I first went on stage, I did it with my natural skin. But my muscles didn’t stand out enough. I’ve accepted that now, as a sacrifice, I have to make to grow as an athlete.

What are some similarities between baduk and fitness?

They both require patience and perseverance. I spent a long time in my youth as a research student to become a professional baduk player. With baduk and fitness, you have to trust yourself to face the tasks at hand every day in order to grow. That’s probably why the feelings I experienced studying baduk come back to me when I exercise. Baduk and fitness are also similar in that you can participate in competitions.

What’s the biggest difference between them?

You have to fight an opponent in baduk, and there is always a winner and loser. Fitness isn’t like that. You can focus more on yourself rather than your competitors. I like that I can focus on improving myself.

I want to exercise not for scores or outcomes but for my own sense of fulfillment.