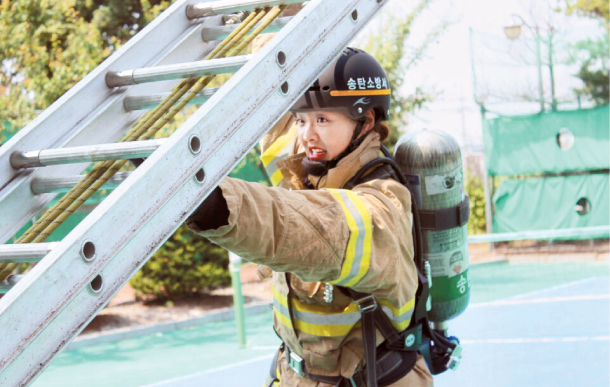 Senior Sgt. Kim Hyun-ah is a paramedic at the Songtan Fire Station in Gyeonggi. While rescue workers are the ones who rush into burning buildings, paramedics like Kim are the ones who provide first aid and transport victims to the hospital.

It was a surprise to many, then, when she decided to participate in an Ultimate Firefighter Race, one of the most taxing and physically challenging courses even for professional firefighters. But on June 7, she became the first woman in Korea to participate. When asked why she did it, Kim simply responded, “Because I’m a firefighter.”

The competition tests strength, agility and mastery of handling firefighting equipment. Participants have to run while carrying heavy supplies, and they can get points deducted or be disqualified if they put buckets or mannequins in the wrong place. Injuries are common, and some quit in the middle of the race.

Kim, who stands at 5-foot-8 and has a muscular build, was determined to tackle the challenge, but she faced adversity from the beginning. She had stopped working out for a while because of frequent dispatches and a heavy workload.

She tried to start training a month before the race, but it was too much for her body, so she decided to focus on running to improve her strength and stamina. She ended up training full-scale just 10 days before the competition.

“It was hard to compete with male firefighters, carrying equipment while running with a respirator on my back,” Kim said, but she clenched her fists, gritted her teeth and kept going.

Among the 91 participants from 31 fire stations in Gyeonggi, Kim was the only female participant in the Ultimate Firefighter Race. She finished in last place with 8 minutes and 16 seconds, far behind the top record of just under four minutes and average record of five.

But when she finished, she received a standing ovation. “The Ultimate Firefighter Race is very taxing, even for male firefighters,” said an official from the Gyeonggi Fire Service, “so it’s truly remarkable that a female firefighter finished the race under the same conditions as men.”

Kim isn’t stopping there. She wants to be the first female rescue worker in Gyeonggi, the ones who get to run into burning buildings and get people out. To do that, she plans to be certified as a rescue diver and emergency rescue technician.

She said that “some sites will require female rescue workers” and she wants to show people that “female firefighters can work on any task, including helping on site.” Kim hopes to become even stronger for next year’s Ultimate Firefighter Race.