Chief justice vows to cooperate with probe, if there is one

Chief justice vows to cooperate with probe, if there is one 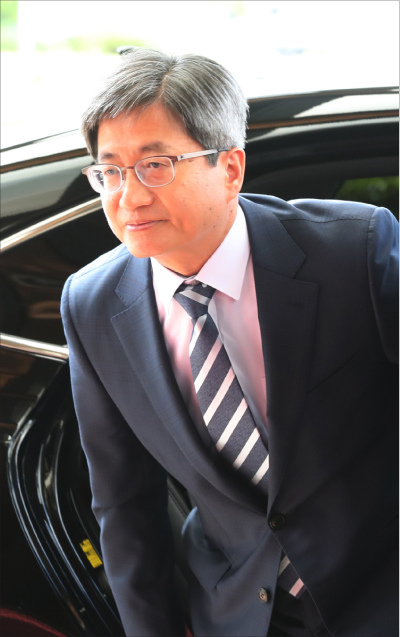 Kim Myeong-su, chief justice of the Supreme Court, arrives at his office in Seocho District, southern Seoul, on Friday. [YONHAP]

Supreme Court Chief Justice Kim Myeong-su said on Friday that his office would cooperate with prosecutors if they choose to investigate his predecessor on allegations of power abuse but fell short of requesting a probe into the case.

“As someone in charge of this institution, I cannot haphazardly seek criminal investigations into the allegations,” Kim said in a statement.

“But if a criminal investigation takes place following requests already made [by nongovernmental organizations,] then we will provide the team with all the information we found through our internal investigation, including documents not yet revealed to the public.”

An internal investigation last month unearthed 410 documents in the computers of the National Court Administration, which processes paperwork for the Supreme Court, that suggest Kim’s predecessor, Yang Sung-tae, might have used his power to influence court decisions and curry favor with then-President Park Geun-hye.

There are also suspicions that he kept a blacklist of judges based on their political and ideological leanings.

If true, the acts represent a serious breach of judicial independence.

Over the past few weeks, Kim has been hearing opinions from judges, who remain divided on whether to request a formal investigation of Yang.

“There were those who asked for a prosecutorial investigation and others who were concerned that doing so might infringe on the judiciary’s independence,” Kim said.

“But the judicial branch is no exception when it comes to bodies that can be investigated by law, and the branch cannot reject or avoid an investigation.”

The chief justice said the court needed to clear suspicions that it tried to influence decisions and make deals with the Park administration, though in the statement, he also said it was “hard to imagine that justices could be influenced in making a decision at the court.”

In their own statement on Friday, other Supreme Court justices denied the possibility that the court doled out rulings to curry favor with the Park administration.

“That allegation has no grounds,” the statement read. “The Supreme Court’s chief justice and justices make decision together on an equal and level field, and it is impossible for the chief justice, or any one justice, to influence a ruling at the court.”

Kim has ordered disciplinary action for 13 judges, including four chief judges of high courts, who were involved in Yang’s alleged corruption. “All the materials found by the internal investigation team will be permanently preserved as well,” he said.

One document discovered by the team, titled “Ways to persuade the BH for the purpose of setting up an appellate court within the Supreme Court,” suggested that a ruling in favor of Won Sei-hoon, the former National Intelligence Service chief on trial for spying during an election, would be a “conciliatory gesture toward the BH,” referring to the Blue House, where the president resides.

During his tenure from 2011 to 2017 - which overlaps with the Lee Myung-bak and Park administrations - one of Yang’s top priorities was setting up a “final appellate court” within the Supreme Court, a project that never came to fruition.

The court would have handled less important cases, allowing the Supreme Court to handle more significant ones. The overtures toward the Blue House were meant to drum up support for this project.

“The judicial branch has been doing all that it can to support the president in conducting state affairs,” another document read.

This document contained 16 Supreme Court cases that were deemed important to the Park administration. In many of them, the Supreme Court overturned a lower court ruling.