From left to right: Cristiano Ronaldo of Portugal in the country’s dark red jersey. Harry Kane of England in the country’s white jersey. The host, Russia, reinterpreted their uniform from the 1988 Seoul Summer Olympics, where they won the gold medal. Nigeria’s jersey is by far the fan favorite, with its green zigzags on the body and black-and-white zigzags on the sleeves. Lionel Messi of Argentina, wearing the country’s signature sky blue and white striped uniform. [NIKE, ADIDAS]

In addition to the world’s top football players, the quadrennial FIFA World Cup is also home to one of sports’ most talked fashion statements - the national team uniform. 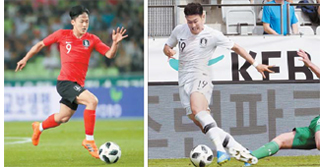 Korea will be wearing its red jersey, left, during its group matches against Mexico and Germany and will wear white against Sweden tonight. [YONHAP]

A national team’s World Cup jersey often represents a country’s culture and history and many of the teams are given nicknames based on the color of their uniforms. Since the Korean national football team was created in 1945, Korea has been wearing red, hence their nickname, the “Red Devils.”

Argentina earned the nickname “La Albiceleste” from its signature sky blue and white stripes while France is known as “Les Bleus” because of their famous royal blue uniform.

Of the 32 countries participating in this year’s FIFA World Cup, red is the most popular jersey color. In addition to Korea, about 40 percent of the countries have red as their main color in the uniform. Korea’s group round opponents - Sweden, Mexico and Germany - will be wearing yellow, green and white. Korea will wear white against Sweden tonight and red in the next two matches, against Mexico and Germany.

Brazil returns to the World Cup with their iconic yellow jersey. Until 1950, Brazil wore uniforms with a white top and bottom. But after they lost the World Cup final that year to Uruguay 1-2, the country decided to change their uniform completely, and start anew. Through multiple nationwide contests, Brazil decided on a yellow jersey in 1954. Ever since the team has donned the yellow jersey, the country has won five World Cup titles, the most in World Cup history.

For this year’s World Cup, some countries have brought back old designs, hoping to repeat their success from the past. Germany is wearing jerseys that resemble the ones they wore when they won the 1990 World Cup in Italy. Argentina has reinterpreted the design from the uniform they wore at the 1990 Copa America, which is the last major football tournament the country won.

Russia, the host country, reinterpreted their uniforms from the 1988 Seoul Olympics. During the 1988 Summer Games, Russia, who competed as the Soviet Union, took home the gold medal.

However, by reusing previous designs, some national teams have found themselves in hot water. When Spain first released their uniform for this year’s World Cup, they were criticized by fans for using a design that resembled the flag used during the country’s Second Republic, a particularly violent time in the country’s history. Four years ago, Japan was criticized for using motifs of the rising sun flag used by the Imperial Japanese Army.

After all of the uniforms for the 2018 World Cup were revealed, various foreign media outlets called for readers to vote for their favorites. The Nigerian national team’s uniform proved to be the most popular for its unique design. The jersey’s green zigzags go well with the black-and-white zigzags on the sleeves and create an instantly recognizable look. Nigeria was the clear winner this year, and sold out in minutes at Nike stores around the world.

Aside from Nigeria, France, Croatia and Belgium have also drawn praise for their uniform designs.

CBS Sports ranked Korea’s uniform 17th out of 32 countries, saying, “The home kit is so simple that it actually works in its favor. The flag-like pattern on the white away kit is also a nice touch.”

However, Australia’s ABC gave Korea’s uniform a two out of 10, adding, “It’s red. Anyone who struggled to come up with ideas for dress-up parties knows the feeling the Korean designers appear to have gone through.”