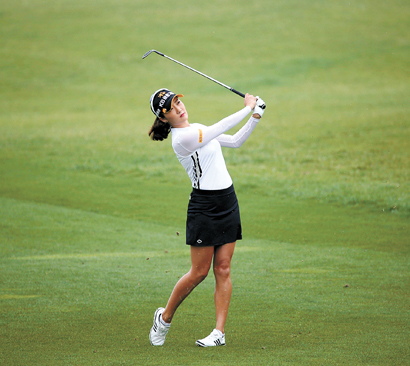 Oh Ji-hyun watches her shot during the final round of Korea Women’s Open at Bears Cheongna Golf Club in Incheon on Sunday. [KLPGA]

Oh Ji-hyun won the KLPGA Tour’s second major of the season, the Korea Women’s Open, at Bears Best Cheongna in Incheon on Sunday.

Oh, who held a three-shot lead heading into the final round, got off to a quick start with back-to-back birdies on the second and the third holes. After shooting two under par on the front nine, Oh extended her lead even further, making four more birdies on the back nine to finish a good eight shots ahead of Kim Bo-ah, the tournament runner-up.

“I had three runner-up finishes this season,” Oh said. “I’m glad they finally paid off. Once I made the first [birdie] putt, I gained confidence and that allowed me to make confident strokes [in the remaining rounds].”

With the win, Oh took home a total of 250 million won ($226,837) and extends her lead in the KLPGA Tour’s player of the year points standings. Though this is Oh’s first win of the season, she has been the most consistent player on the Tour this season, and she is currently ranked first in the Player of the Year award standings.

Oh turned professional in 2013, playing mainly on the Dream Tour and the Jump Tour. After finishing 10th in a qualifying tournament, Oh made her KLPGA Tour debut in 2014.

Since the 2015 season, she has won at least one tournament each season and last year Oh won two tournaments.

The victory on Sunday gives Park her fifth career win on the KLPGA Tour and is her second major title.

Park In-bee shot one under par in the final round to finish the tournament tied for 13th, at three under par. Lee Jeong-eun, who won four tournaments last season and was last year’s KLPGA Tour Player of the Year, finished tied for third at seven under par, 281.

The KLPGA Tour will continue at the 2018 BC Card Hankyung Ladies Cup, from June 21 to 24, at Island Country Club in Ansan, Gyeonggi.

On the KPGA Tour, Park Sang-hyun had a thrilling come-from-behind victory with a birdie on the last hole to win the KEB Hana Bank Invitational at Lakeside Country Club in Yongin, Gyeonggi, on Sunday.

Park started the final round one shot behind the leader Lee Sung-ho. In the first nine holes, it seemed as if Park didn’t have a chance for a victory, as he was four shots behind the leader, Lee. However, with three straight birdies starting with the par-4 10th, Park finally tied for the lead at the par-4 14th.

On the last hole, Park made a birdie and Lee finished with par, giving Park the win by one shot.

With the victory, Park became the KPGA Tour’s first multi-winner of the season and took home the 200 million won prize money. The KPGA Tour will continue at the Kolon Korea Open, from June 21 to 24, at Woojung Hills Country Club in Cheonan, South Chungcheong.