Red Devils hope to pull off upset against Sweden

Red Devils hope to pull off upset against Sweden 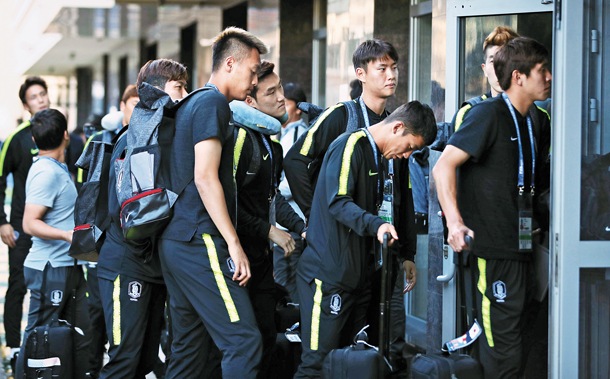 Korea will try to create an upset when they go head-to-head against Sweden in their 2018 FIFA World Cup opening match tonight.

Korea will take on Sweden in their Group F opener at Nizhny Novgorod Stadium in Nizhny Novgorod today. The match will start at 3 p.m., local time, or 9 p.m., Korea time.

Korea, in their 10th World Cup, are certain underdogs in their group, where they are also paired with defending champions Germany and Latin-American powerhouse Mexico.

Neither history nor statistics are in Korea’s favor when it comes to their meeting with Sweden.

Korea, led by head coach Shin Tae-yong, is ranked No. 57 in the latest FIFA rankings, while Sweden sit at No. 24. The Taeguk Warriors have yet to collect a win against the Blagult, or the Blue-Yellow, on the international stage. Korea has two draws and two losses from their four previous encounters with Sweden, although their last meeting was in 2005.

Probably the only statistic that Korea can rely on is their opening match results in recent World Cups. Beginning in 2002, Korea has not lost any of their first World Cup matches, collecting three wins and one draw.

Neither team had an impressive World Cup tune-up before landing in Russia. Korea played to a scoreless draw with Bolivia and fell 2-0 to Senegal in their friendly matches in Austria. Sweden had 0-0 draws with Denmark and Peru in their World Cup warm-ups at home.

The two teams entered Russia on Tuesday, with Korea heading to their base camp in Saint Petersburg and Sweden going to Gelendzhik.

There has been an off-pitch battle between the two sides ahead of their Group F clash. Sweden claimed they’ve analyzed all of Korea’s closed-door trainings in Austria, while Korea accused Sweden of playing the press to distract them.

Shin has yet to confirm whether he will use a back three or a back four against Sweden, whose main formation is 4-4-2. Korea mostly used a 4-4-2 setup in their recent friendly matches.

But whether it’s a back three or a back four, Korea kept a two-forward system with Son Heung-min and Hwang Hee-chan playing up front. Son is arguably Korea’s best player in recent years. The Tottenham Hotspur talisman has 21 goals in 67 caps.

If using 4-4-2, they’re likely to be flanked by two Lees - Lee Seung-woo on the left and Lee Jae-sung on the right. Seung-woo, who plays for Hellas Verona in Italy, is the youngest player on the squad at age 20, but he is known for his dribbling skills and ball control. Jae-sung, a reigning K League 1 MVP, knows how to play smart on the pitch with his lethal left foot.

Korean captain and Swansea City anchorman Ki Sung-yueng will orchestrate the midfield with his defensive partner Jung Woo-young. Ki will be the man distributing the ball and controlling the team’s buildup.

Korea is likely deploy the center back duo of Jang Hyun-soo and Kim Young-gwon, who are currently the most experienced defenders on the squad. Veteran right back Lee Yong is set to start on the right side of the defense, with former Borussia Dortmund man Park Joo-ho likely to start ahead of Hong Chul and Kim Min-woo.

Kim Seung-gyu, who also competed at the 2014 World Cup, is likely to be the starting goalkeeper for Korea, ahead of the less experienced Jo Hyeon-woo, who only has six caps under his belt.

If using a back three, Korea can add Yun Young-sun or Jung Seung-hyun to their three-man defense and have Lee Yong and Park Joo-ho take care of the flanks as wing backs. Lee Jae-sung then could be used as attacking midfielder in the center.

Sweden, led by Janne Andersson, have been pretty much sticking to their 4-4-2 system, with Al Ain striker Marcus Berg and Toulouse forward Ola Toivonen playing upfront.

Their attacking ace, however, is Emil Forsberg, former German Bundesliga assist king with Leipzig. The 26-year-old’s position is listed as left winger, but he is likely to cut into the center to create chances. Viktor Claesson, who is with Russian side Krasnodar, is expected to start on the right wing.

Veteran midfielder Sebastian Larsson and Albin Ekdal are likely to be the center midfielders against Korea.

But it was that stingy and powerful defense that helped Sweden to reach the World Cup ahead of football giants like the Netherlands and Italy in their qualifying campaign. Led by captain Andreas Granqvist, Sweden boasts defenders who are physically strong.

Granqvist, who is also with Russian side Krasnodar, is likely to form the center back line with Manchester United’s Victor Lindelof. Mikeal Lustig of Celtic is certain to start as a right back, while Ludwig Augustinsson of Werder Bremen or Martin Olsson of Swansea could play as left back.

Robin Olsen, who is with Danish club FC Copenhagen, is likely to wear the gloves for Sweden.

Korean head coach Shin, 47, previously managed Korea’s under-20 and under-23 squads, and has coached tournaments such as the 2017 FIFA U-20 World Cup and the 2016 Rio De Janeiro Olympics. However, this is his first World Cup experience.

Andersson, 55, took the helm of Sweden after EURO 2016. He’s known for his achievements in the Swedish league, leading Norrkoping to the domestic league title in 2015 to end their 26-year drought.

The Group F contest between Korea and Sweden is the first World Cup match to be staged at Nizhny Novgorod Stadium in Nizhny Novgorod. The home stadium of local club FC Olimpiyets can accommodate 45,000 fans.