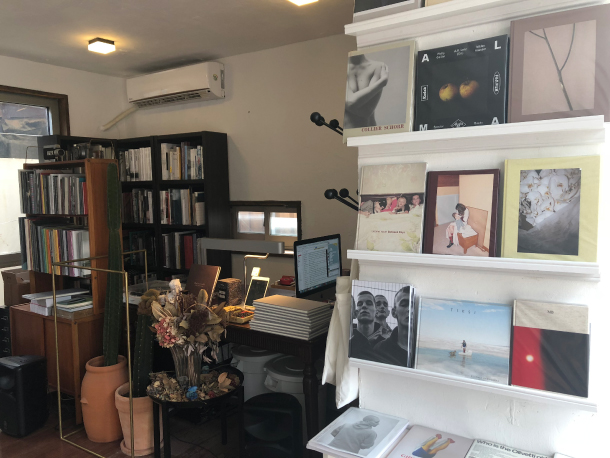 At Irasun Bookstore, a wide variety of photo books difficult to find elsewhere in Korea are on sale. The bookstore also holds a book talk with an artist once a month. [LEE SUN-MIN]

Browsing the thousands of books at major book retailers can be fun for those who aren’t sure what book they want to go home with. But if you have a subject you want to delve into, smaller bookstores that are focused on specific themes are where you should go.

Small, curated science, history and art book shops are popping up all over central Seoul, especially in the areas close to Gyeongbok Palace. Samcheong-dong to the east of the palace and Seochon to the west are two areas where small bookstores, often with cafes for reading, are springing up to cater to those wanting to delve deep into a subject they are interested in. 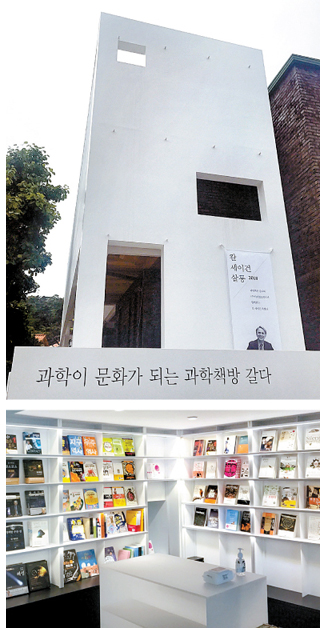 Top is the facade of Galda, a science-themed bookstore in Jongno District, central Seoul. Insdie has a display of books in different categories of science. [JOONGANG SUNDAY]

One recently-opened specialty bookstore is Galda in Samcheong-dong, a neighborhood in central Seoul’s Jongno District. The bookstore that opened last month isn’t only a place where books are sold. It plans to be a gathering spot where scientific ideas can be discussed and shared. The outside of the building reads “Science Bookstore Galda, where science becomes culture,” to highlight the store’s goal of making science more approachable in people’s daily life. The name Galda comes from combining the names of renowned scientists Gallileo and Darwin.

In charge of the bookstore is astronomer and popular lecturer Lee Myeong-hyeon, but it wasn’t just him who opened this spot. About 60 to 70 scientists and cultural experts interested in learning more about science became shareholders about two years ago. Another 30 to 40 science experts have shown interest in helping out with running the bookstore and holding special events.

The three-story bookstore which used to be a home looks more like a book cafe than a store filled to capacity with books on the shelves. Titles on similar themes and ideas are put together, from fables to more in-depth studies for field experts.

The second floor is a place for readers to meet with writers. The most eye-catching area is called a writer’s room. Writers can choose a date and time to meet with the readers and have a talk in the space. Writer Kim Tak-hwan has already posted his availability for July 4 on the store’s website.

There will also be academic lectures available on the second floor. Lee will take a lead to explain the classics, especially books almost everybody who has an interest in science owns but never gets to finish. The first lecture series will be on Carl Sagan, the American astronomer who wrote “Cosmos.” The lectures on Sagan and his books will run for six weeks.

The book store’s basement will be home to more diverse events on science. Last month, there was a workshop to celebrate the opening of the space and the topic was science communication. The workshop focuses on how professionals in the field can make science more approachable when it comes to explaining scientific theories to laymen and young students.

Some of the panelists at the workshop there argued that there are only young children at science centers and the only adults found there are either employees or teachers that lead children, pointing out that there is a lack of space where adults can go and satiate their thirst for science. 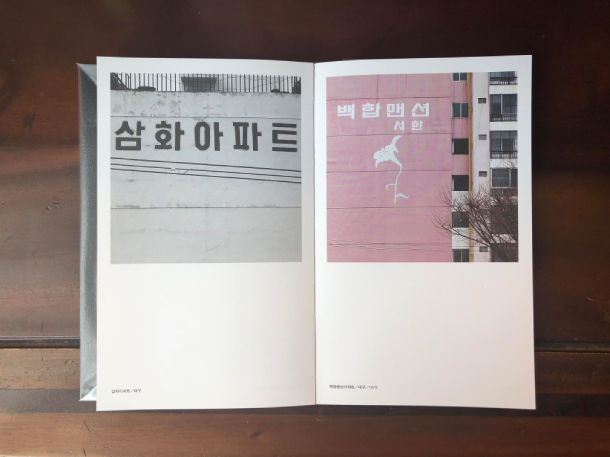 A look inside the photo book “Apartment Letters.” [LEE SUN-MIN]

While the science bookstore sits to the east of Gyeongbok Palace, there are even more specialty bookstores on the west side of the palace.

Irasun Bookstore is home to many types of photo books. The shop sells not only books by popular artists like “Echo” by Lee Jung-jin, but also a variety of photo records of scenes from Korea and overseas.

“Apartment Letters” by four different artists is a collection of photos of facades of older apartment buildings that display the names of the complexes to show how writing styles on buildings has changed in Korea over the years.

Other books are similar to biographies of a person through photos, such as “Yunmi’s Album - From the Cradle to the Wedding.” The book captures the eyes of visitors, making them want to flip through their childhood albums when getting home.

Left: The interior of Book Society, where art and design books and magazines are found. Right: History Books, in Seochon, Jongno District, offers a wide array of books about local and global history. [LEE SUN-MIN]

The bookstore holds a book talk in its space once a month. The talks are usually scheduled on Sundays, and the bookstore posts a notice of the event on Tuesdays. Some 20 to 30 people gather to talk with their favorite photographers for about an hour.

Design and art aficionados should head to Book Society. In a rustic-looking space on the second floor of a building, a series of art magazines like Art in Culture, selections of Art Magazine Boan, an irregular publication produced by neighboring Artspace Boan, and many more books and art series are available for purchase.

History Books, also known as Yeoksa Chaekbang in Korean, is where history buffs can find the books on their favorite topics. The bookstore creates displays about what has happened years ago, and puts out books that are relevant to events that happened in the same month decades or centuries prior. Since the summit between the United States and North Korea just took place, many books on international relations and the politics and economy of North Korea are set up in the front of the store.