Jobs vanishing among Koreans in their 30s, 40s

Jobs vanishing among Koreans in their 30s, 40s 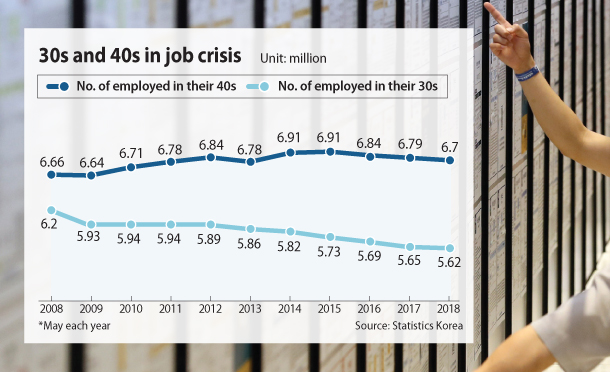 Koreans in their 30s and 40s are losing jobs despite being the nation’s driver of economic activities, data released by the national statistics service on Friday showed.

The number of Koreans in their 40s with jobs has declined for 31 straight months, the longest period since Statistics Korea first compiled data in its current form in 1982.
Even during the Asian financial crisis of the late 1990s, on-year declines lasted just 10 months starting in April 1998.

The job situation for Koreans in their 30s is also looking grim.

Economists say that a fall in the working population of people in their 30s and 40s is a grave sign.

“The 30s and 40s age group forms the core of a country’s labor force,” said Cho Joon-mo, a professor of economics at Sungkyunkwan University.

“Low employment among people in their 20s and above 60 can be a temporary problem linked to the economic cycle,” he said. “But a problem among the 30s and 40s age group means there’s a structural problem - a permanent mismatch in the demand and supply of the labor market.”

The same data showed that the number of Koreans in their 50s and 60s with jobs was constantly increasing, boosted by a government drive to hire older people in the public sector. The 60s-and-above group, in particular, saw 240,000 more jobs created in May compared to the previous year, the highest job increase rate in all age groups.

However, analysts say the jobs created for this age group are low-paid, temporary positions.

A long-term decline in jobs for people in their 30s and 40s isn’t good news for the younger generation, which is already struggling to find work. In May, the 15- to 29-year age group saw a 95,000 jobs decline compared to the previous year. That was the steepest fall among all age groups.

May’s employment report raised other alarming signs. Only 72,000 new jobs were created last month compared to the previous year - the lowest monthly increase in eight years and four months. The number of employed in the working-age population of between 15 and 64 years fell for the third consecutive month. The last time this happened was right after the global financial meltdown of 2009.

Analysts say the government must face the fact that a 16.7 percent hike in the minimum wage is causing a negative shock to the labor market. Last month, Jang Ha-sung, the presidential chief of staff for policy, said that there is no proof that the minimum wage hike affected job losses.

“Employment statistics in the last few months have been very bad and I think the issue should not be discussed without considering the implementation of the minimum wage hike,” said Yoon Chang-hyun, a professor of business administration at the University of Seoul.

“The government should include the effects of the minimum wage hike in the discussion [of job policies] and come up with a flexible policy solution before the problem becomes a structural one.”