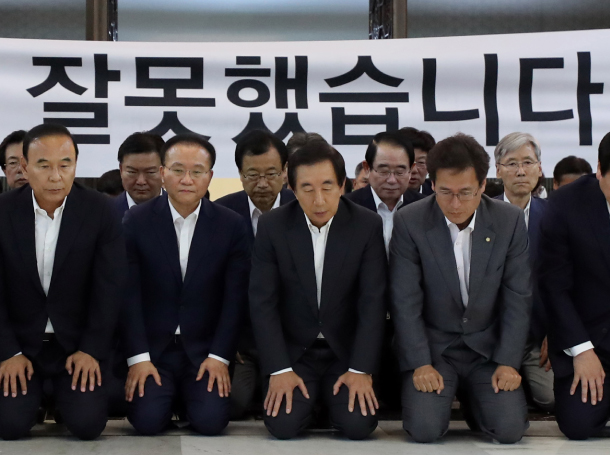 Leaders of the main conservative opposition Liberty Korea Party kneel to apologize for their failure to win voters’ support in June 13 local elections after a party lawmakers’ meeting on Friday. [YONHAP]

The former head of the opposition Liberty Korea Party (LKP) who led his party to a humiliating defeat in local elections last week assailed fellow party lawmakers who challenged him, calling them “psychopaths.”

“What I regret the most from my yearlong term as party chairman is that I failed to rid the party of unethical lawmakers and those who always put first the interests of their own faction,” fumed Hong Joon-pyo, who stepped down as party chief Thursday to take responsibility for the crushing defeat in last Wednesday’s local elections, in a Facebook post Saturday.

Determined to go after his critics in the party and shift the blame for the electoral loss, he wrote, “I will give my blunt remarks for the last time.”

He went on to say he spent the last 11 months as party head surrounded by people who “should not be in politics for their embarrassing private lives,” who “attended a lawmakers’ meeting drunk” and who were “psychopaths incapable of controlling their emotions.”

The conservative LKP lost all but two of 17 key races in the local elections, its worst electoral performance in history.

Following Hong’s resignation, LKP’s supreme council members and spokespersons also resigned en masse. With all spokespersons leaving their posts, the party has been unable to issue official statements in the past few days.

The LKP is now run by floor leader Kim Sung-tae in emergency mode and a plan to hold a party convention to elect a new chairperson has yet to be made.

In a gesture of atonement to voters, LKP lawmakers knelt in the lobby of the National Assembly Friday with a banner behind them reading, “We are sorry.”

The ruling Democratic Party (DP), which won all but three of the 17 key races and dominated local city councils with their candidates, pilloried it as a “pretension of regret.”

“The group display of apology [on Friday] was only a pretension of regret. When someone says he or she regrets something, they must clearly state what they have done wrong and how they are going to improve,” said Kim Hyun, the DP spokeswoman, Sunday.

The centrist Bareunmirae Party, which also suffered humiliating defeats Wednesday and failed to elect a single mayor or county chief, is also mired in internal strife after co-chairman Park Joo-sun, who stepped down from his post Friday, openly disagreed with Yoo Seong-min, who co-chaired the party until Thursday.

Taking issue with Yoo’s remarks, Park said, “There have been opinions that our party disregarded those on the left while only caring for those on the right.”

The party is set to hold a two-day workshop from Tuesday over the future of the party.