A former coach of Korea’s short track speed skating team, who allegedly assaulted an athlete, was questioned by the police on Monday and admitted to the charges against him, according to police sources. 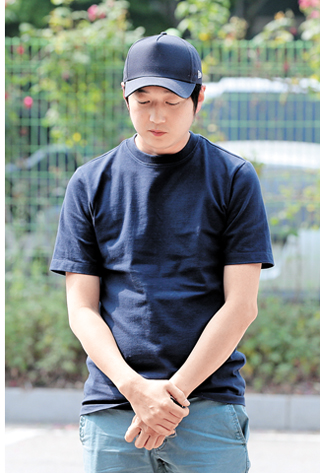 The Gyeonggi Nambu Provincial Police Agency in Suwon called Cho Jae-beom in for interrogation at 10 a.m. Monday and grilled him for nearly eight hours. He refused to answer reporters’ questions as he entered the police station and said only that he’d cooperate with the authorities as best could. On his way out, Cho told reporters, “I am sorry.”

Cho received a lifetime ban from the Korea Skating Union (KSU) in January this year for allegedly hitting Shim Suk-hee, one of the country’s biggest short track stars, during practice. The incident took place just weeks before the PyeongChang Winter Olympics. Due to the incident, Shim left Jincheon National Training Center for the hospital to be treated for minor injuries.

After the Olympics, the sports ministry conducted an independent probe into the case. It concluded on May 23 that Cho’s alleged assault was more serious than first reported, and asked the police to investigate the matter further. On May 27, Gyeonggi police said Shim testified that he was struck by Cho on two previous occasions, including once from 2017.

Earlier in May, Chinese media reported that Cho had joined the Chinese national short track team, along with another Korean coach, Song Jae-kun, who had been coaching in China since 2015. Though Cho is free to work outside Korea, his presence on China’s side during international races will likely be distracting for Korean skaters. The two countries have been locked in a short-track rivalry for years.

Cho returned to Korea on June 7. He refused to answer reporters’ questions as he entered the police station and only said he’d cooperate with the authorities as best he could.

Shim, 21, is a two-time Olympian with one silver, one bronze and two gold medals to her credit. Skating just weeks after the assault, Shim, the captain of the Korean women’s short track team, helped Korea to win gold in the women’s 3,000-meter relay at the PyeongChang Games. It was her second consecutive gold in the relay event. Other than the relay race, Shim struggled to medal in individual races.

After the Olympics, Shim finished runner-up at the season-ending ISU World Championship in the overall point classification, behind Choi Min-jeong.