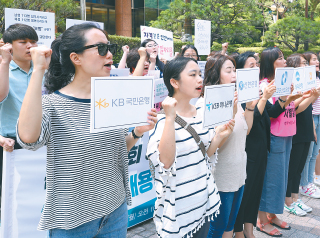 Activists demand that banks publicly release the gender ratio of their applicants and recruits to ensure fair hiring at a press conference in front of the Korea Federation of Banks in Jung District, central Seoul, on Monday. [YONHAP]

KB Kookmin Bank announced that it would revamp its hiring process on Monday after the prosecution indicted leaders at multiple banks over illegal hiring practices that favored candidates with connections to politicians or executives.

The bank’s labor union, however, said that the changes were not enough, and demanded that KB Financial Group Chairman Yoon Jong-kyoo step down.

A total of 38 people, including four former and incumbent bank presidents, were brought to trial over obstruction of business charges in connection with hiring irregularities at six commercial banks - KB Kookmin, KEB Hana, Woori, Busan, Daegu and Kwangju.

But Yoon was excluded from those indicted.

The investigation revealed corruption in the banks’ recruitment processes. During Kwangju Bank’s recruitment process in 2015, a general executive in the bank’s employment department came in during the second round of applicant interviews to give his daughter the highest score. The applicant wrote in her cover letter that her father worked at Kwangju Bank, and the personnel manager gave her a perfect score.

At KEB Hana Bank, an outside figure asked the bank’s recruitment team to hire his daughter by falsely claiming that she was the daughter of an auditor at the Blue House.

A hiring manager at KB Kookmin Bank mistook a female applicant for a bank vice president’s son, as her name and birth date were the same as his. The manager manipulated her recruitment score to help her find a job, and later rejected her from the company after finding out the vice president’s son was a man serving in the military.

Former lawmaker Cho Moon-hwan was also found to have requested that his daughter be hired by Busan Bank in October 2015. Cho had been serving as the head of the Gyeongnam Development Institute at the time, and had influence over choosing which bank vault the South Gyeongsang government would use for deposits.

The bank manipulated Cho’s daughter’s score, but when she still failed the hiring process, it increased the number of applicants it recruited and even conducted an unplanned English interview to help her pass.