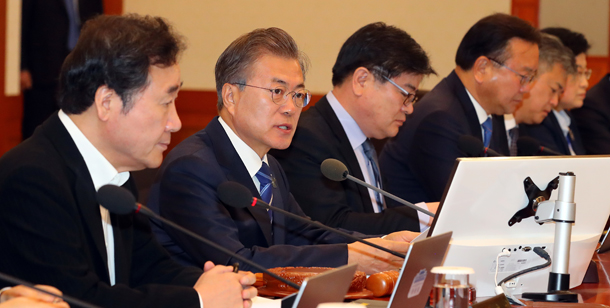 President Moon Jae-in presides over a cabinet meeting to promulgate a revised law aimed at changing the cap on weekly working hours from 68 to 52 hours. The law goes into effect on July 1. [YONHAP]

Most election prediction agencies forecasted Democratic candidate Hillary Clinton’s victory for the U.S. presidential election in November 2016. But the LG Economic Research Institute predicted Republican candidate Donald Trump’s victory and quietly drafted an internal report. The institute was confident on the prediction model they used. It is rather simple. If the economic growth rate in the last year of the current president’s term is higher than the first year, the ruling party would win. If not, a change of power would happen. In 2013, the first year of the second Obama administration, the economic growth rate was 1.7 percent, and in the fourth year of 2016, it was expected to be 1.4 percent to 1.6 percent, and it closed at 1.6 percent. Since the 1960s, the rule has had no exception, and it turned out to be correct once again.

Does this model work in Korea? In the seven presidential elections since a direct voting system was implemented in 1987, the model has only worked three times, with Park Geun-hye’s last year being 2016. But Korea’s elections are largely affected by changes in party structures, so the model for the two-party system in the United States can’t perfectly apply to Korea.

Although there is no completely accurate election prediction model for Korea, there are studies that indicate voters make decisions based on their own evaluation of the economy rather than economic indicators. President Kim Dae-jung accomplished the first-ever transition of power in the constitutional history of Korea via an election in the aftermath of an International Monetary Fund (IMF) bailout. After 10 years of progressive administrations, Lee Myung-bak may have been elected because voters hoped that conservatives may be better for the economy than their predecessors. Here, the process of the current administration’s coming into power was also due to the economic failure of their former incumbents.

For the latest local election, the economy had no chance of becoming an issue. Changes in the Korean Peninsula and the opposition party’s repeated blunders delayed the test. After the election, there have been disappointing indicators. In May, the number of new employees fell below 100,000, and statistics on youth employment are at record lows. In addition to the minimum wage, there are more tasks awaiting, such as the 52-hour workweek, innovative growth and conglomerate reform.

In the U.S. presidential election of 1992, Bill Clinton won with the slogan, “It’s the economy, stupid!” Almost two decades later, in time for Barack Obama’s reelection, Clinton published his book “Back to Work” with policy advice on how to revive the economy. It would be equivalent to a campaign slogan, “It’s jobs, stupid!” The economic test has been delayed, but it has to be taken someday.