Maker defends IQOS with its own study

Maker defends IQOS with its own study 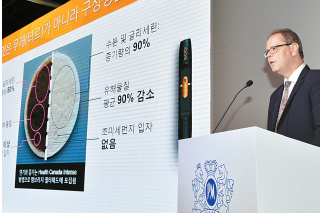 The controversy over the safety of heat-not-burn cigarettes continues as Philip Morris International rebutted government’s claims with its own internal test results that show they are less unhealthy than conventional cigarettes.

A clinical test was conducted for six months in the United States. A total of 984 smokers were divided into two groups: one that continued smoking regular cigarettes and another that switched to IQOS heat-not-burn cigarettes.

The company tracked eight indicators such as the degree of clogged blood veins or amounts of white cells. These eight indicators show that normal cigarettes negatively affect the human metabolism and can eventually lead to cardiovascular or respiratory diseases or cancer, which together account for 80 percent of all smoking-related diseases.

“The exposure-response study showed that the eight clinical risk endpoints for smoke-related diseases improved in smokers who switched to IQOS compared to those who continued smoking [regular cigarettes],” said Manuel Peitsch, Philip Morris International’s chief science officer and a toxicology expert, at a media event held in central Seoul.

He added that five of the eight markers showed significant changes. When asked about the possibility of a new harmful substance not known to be produced by combustible cigarettes, Peitsch answered that the company had “not found in IQOS aerosol substances for which exposure level would cause additional hazard.

“It’s highly unlikely that we’ll have something new popping out in IQOS that does not already exist in the residue of combustible cigarette smoke,” he added.

The company said that the test was the largest done to scientifically assess heat-not-burn cigarettes’ effects on the human body.

The data was submitted this month to the U.S. Food and Drug Administration, where tests on IQOS’ health effects are ongoing, and is planned to be submitted soon to Korea’s Drug Safety Ministry as well.

Monday’s results add to a three-month clinical test in Japan that showed IQOS users’ exposure to toxic substances dropped to a level equivalent to 95 percent of the reduction enjoyed by test subjects who completely quit smoking, according to the company.

On June 7, the Ministry of Food and Drug Safety announced that heat-not-burn cigarettes are not safer than combustible ones and they may actually produce more tar.

Philip Morris and British American Tobacco, which produces Glo, said that defining health effects based on a comparison of tar levels is “misleading,” saying the smoke produced from combustion and aerosol from heat-not-burns have completely different constituents.

Philip Morris International reaffirmed this stance on Monday, saying the government‘s conclusion did not reflect its own test results that showed heat-not-burn cigarettes released lesser amounts of nine substances defined as harmful by the World Health Organization. The stance of cigarette companies is that the government’s announcement was focused on tar, making it sound like it is a toxin, while it is merely a term that refers to smoke.