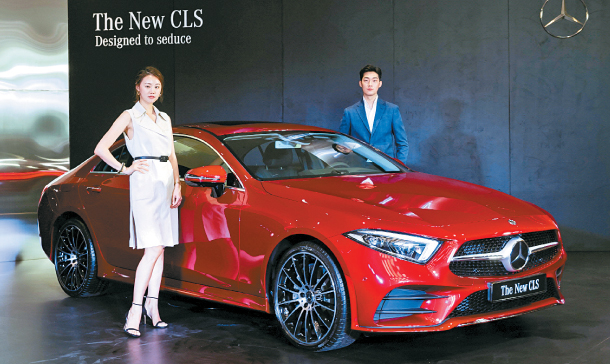 Models pose with Mercedes-Benz’s new third-generation CLS model, which was fully revamped for the first time in six years, at a media event on Monday in southern Seoul. [MERCEDES-BENZ KOREA]

Mercedes-Benz unveiled its new CLS four-door coupe in Korea on Monday. The automaker hopes the sleek new model will help it continue to reign over Korea’s foreign car market.

Mercedes sold 2,303 CLS models last year, making it the second-largest market for the car after China.

The CLS has had a full design overhaul, and its technological features have been revamped to match the automaker’s flagship S-Class sedan.

The new CLS is more generous with interior space than in the past, as it offers five seats now, up from previous models’ four.

The CLS is one of Mercedes-Benz’s more design-focused vehicles, and stands out in the crowd with its sleek sideline and dramatic tail lamps.

The third generation embodies a new design identity, as it features the same round tail lamps as the company’s recent coupes. Mercedes like to call the CLS’ aggressive, forward-facing stance a “shark nose.”

The CLS 53 line is a hybrid with an electric motor that enhances the car’s performance as well as its fuel efficiency.

The model generates 435 maximum horsepower with 53 kg/m (35.6 lb/ft) of torque, but when activating the EQ Boost electric motor, its horsepower is boosted by 22 and torque by 25.5 kg.m.

The company’s energizing comfort control system analyzes driver mood and can change the lighting, temperature and sound of the car on its own.

The new CLS will hit Korean roads in the third quarter of this year.