Officials from Ulju County, Ulsan, home to a number of nuclear reactors, recently visited the Czech Republic, according to the local government on Monday, the latest effort to help Korean companies to successfully export their technologies overseas.

Although the Moon Jae-in administration is trying to wean Korea off nuclear power domestically, it still wants to export nuclear reactors and related technologies.

Korea Hydro & Nuclear Power (KHNP), a state-run nuclear power operator, announced last Friday that it will immediately shut down Wolsong-1, the country’s oldest reactor, before the end of its life cycle, and cancel plans to build four new reactors in the country - Cheonji 1 and 2 units and Daejin 1 and 2 units.

As a result, the number of nuclear reactors under operation will fall from 24 right now to 18 by 2030.

The decision by the KHNP is also likely to cost a number of jobs in the sector.

According to a recent report, building two nuclear reactors requires about 15,000 workers, about 90 percent of which come from small and mid-sized companies. So canceling the construction of four reactors will take away as many as 30,000 jobs.

College graduates with degrees in nuclear engineering have a more challenging future than they imagined just a year ago.

But the government refutes such gloominess.

Data shows that the operating profit of Korea Electric Power Corporation (Kepco), a state-run energy company and the parent company of KHNP, plummeted by 58.7 percent in 2017 compared to a year ago. The company recorded an operating loss in the fourth quarter of last year as well as the first quarter of this year, the first time in five years that the energy company’s profit was in the red for two straight quarters.

Kepco purchases electricity from power generators. Electricity generated from nuclear reactors is the best option for the company because it is the cheapest.

The operating rate of local nuclear reactors has fallen from nearly 80 percent in 2016 to 71.3 percent last year. The rate dropped to around 50 percent as of the first quarter of this year.

On the flip side, the price of crude has been on a rapid rise, boosting the cost of producing electricity from oil. 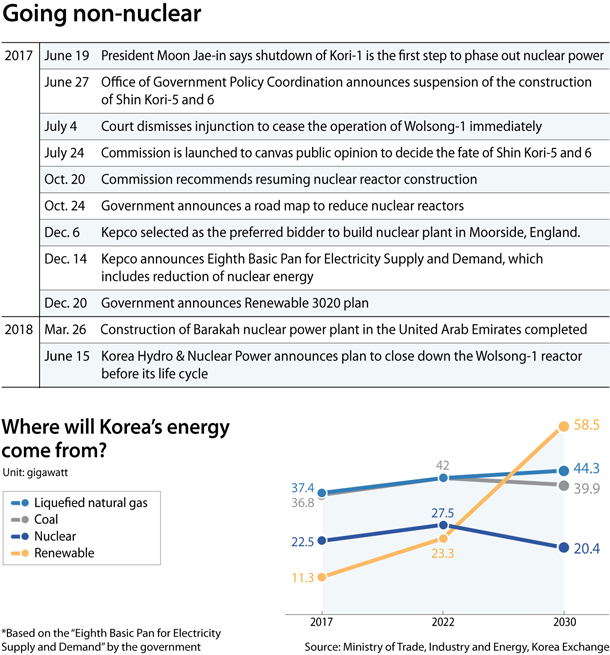 The price of crude oil last June stood at around $40 per barrel. In just one year, it increased by around 50 percent, and is currently in the $60 to $70- per barrel range.

Raising the price of electricity is not a viable option for the government since the Moon administration vowed from the beginning that it will not increase energy prices.

The continuous struggle by the company has dealt a heavy blow to its share price, indicative of investors’ gloomy sentiments about the company’s future.

Along with its mother company, KHNP also suffered, its operating profit taking a nosedive by about 75 percent from the first quarter of last year to the same period this year. Analysts predict that the company will post 12.5 billion won in net profit this year, a 98.5 percent fall from last year.

In the midst of uncertainties and unfavorable predictions, the company says it will transform itself from a nuclear power supplier into a “comprehensive utility firm.”

In a recent meeting with reporters, Chung Jae-hoon, the CEO of KHNP, said the company will earn profit through services such as energy consulting rather than just selling hardware such as nuclear reactors.

“If the business of a state-run company loses its direction, its suppliers will be forced to change their business as well, which could mean more job losses for the public,” said a local expert who didn’t want to be quoted as saying KHNP’s moves were possibly irresponsible.

Other experts called on the government to resume construction of the Shin Hanul 3 and 4 units.

While the company’s board of directors decided to stop the construction of other reactors, it postponed a decision on those two units, on which the company spent about 177 billion won.

Joo Han-gyu, a professor of nuclear engineering at Seoul National University, proposed that the government builds Shin Hanul 3 and 4 units with APR 1400+, which is an upgraded model of the APR 1400 reactor. The APR reactors are independently designed and created by the Kepco. The APR 1400+ boasts the same capacity and life expectancy as its predecessor but comes with an improved level of safety.
“We need to export this technology in the future so [establishing Shin Hanul 3 and 4 with APR 1400+] would allow [KHNP] to review the new reactors,” said Joo.

Still, other experts say that exporting reactors will not be enough to sustain the industry in Korea.

“It’s impossible to keep the ecosystem of nuclear energy industry alive by just exporting,” said Hwang Il-soon, a professor at the Department of Energy Systems Engineering. “The government should consider slowing down the pace at which it alters its energy policy.”