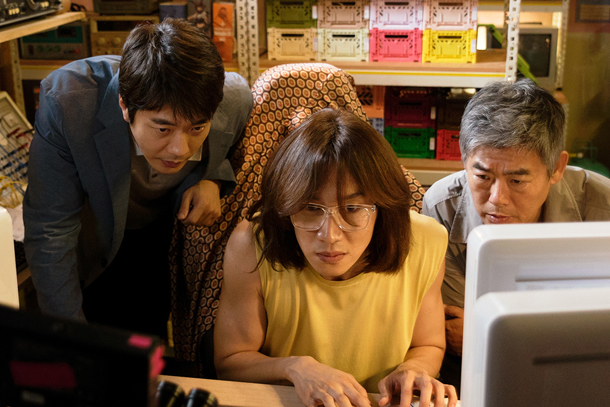 The sequel to “The Accidental Detective” (2015), which sold 2.62 million tickets, topped the weekend box office in its debut weekend by selling 687,000 tickets at 1,040 screens from Friday to Sunday, accounting for 34.8 percent of the entire weekend sales.

Since its release on Wednesday, the movie has sold more than a million tickets, raking in a total of 9.05 billion won ($8.12 million).

Once again starring the duo of Sung Dong-il and Kwon Sang-woo, the sequel takes place as a comic book storekeeper (Kwon) and the legendary homicide detective (Sung) team up to open their own detective agency.

Though they feel disappointed after only getting trivial cases at first, the pair digs into their work after receiving a request from a woman to find the truth behind the death of her fiance. Actor Lee Kwang-soo joins the duo this time around, and brings the laughs along with him.

Despite its successful debut, the film encountered backlash from some fans after they realized that some violent scenes had been cut from the original.

Following the backlash, UPI Korea released an official statement, saying that “‘Jurassic World 2’ offers different versions depending on the environment of each country’s [film] market.” Other countries are showing the same version as the one shown in Korea, said the distributor, and stressed that UPI Korea did not request that certain scenes be edited out.

Coming in third was “Ocean’s 8.” The latest installment in the popular Ocean franchise, which features an all-female cast and stars high profile names like Sandra Bullock and Cate Blanchett, sold 355,000 tickets in its first weekend.

The spin-off centers around a revenge heist orchestrated by Debbie Ocean (Bullock), who, along with her partners in crime, plan to steal a Cartier necklace from the neck of actress Daphne Kluger, played by Anne Hathaway, at the Met Gala.

While crime action flick “Believer” slid two spots to rank at fourth in its fourth weekend, comedy “I Feel Pretty,” led by Amy Schumer, rounded out the top five in its second weekend.