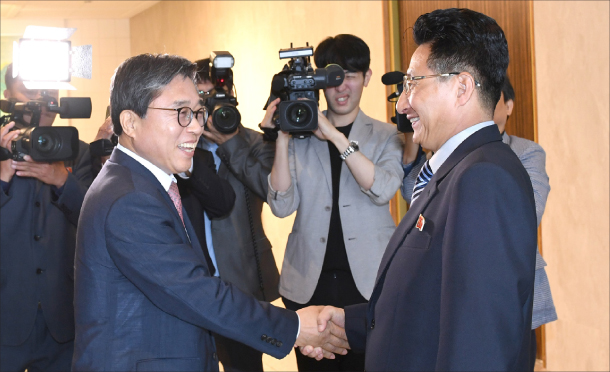 Jeon Choong-ryul, left, secretary general of the Korean Sport & Olympic Committee, who led South Korea’s delegation for a sports meeting with North Korea on Monday in the truce village of Panmunjom, shakes hands with Won Kil-u, Pyongyang’s vice minister of physical culture and sports, ahead of talks. [YONHAP]

South and North Korea will hold a friendly basketball game in Pyongyang on July 4 and follow up with a second game in Seoul this fall, both countries agreed Monday at the truce village of Panmunjom. Both Koreas will also march side-by-side in the opening ceremony of the upcoming Asian Games on Aug. 18 in Jakarta, Indonesia, under a unified flag and form joint teams for several sports at the games.

The agreements were hammered out in a meeting between South and North Korean officials in Panmunjom, the latest in a series of discussions to flesh out the Panmunjom Declaration signed by the leaders of both countries on April 27.

Negotiations began at 10 a.m. in the Peace House, a South Korean-controlled building in Panmunjom, and ended around 6 p.m. South Korea’s Ministry of Culture, Sports and Tourism announced in a statement following the meeting that both countries agreed to boost sports exchanges at various levels, including forming joint teams at international events this year and having each other’s athletes train together before the games.

The idea to hold a friendly basketball game was initially floated by North Korean leader Kim Jong-un, an avid fan of the sport, during his first summit with South Korean President Moon Jae-in in April. The Panmunjom Declaration states that both leaders agreed to “demonstrate their collective wisdom, talents, and solidarity by jointly participating in international sports events such as the 2018 Asian Games.”

Jeon Choong-ryul, the secretary general of the Korean Sport & Olympic Committee, led South Korea’s delegation to the meeting on Monday, which included two other officials.

The North’s side was represented by Won Kil-u, vice minister of physical culture and sports, another official from the same ministry and one from the Committee for the Peaceful Reunification of the Country, a cabinet-level department that oversees inter-Korean ties.

The first time both Koreas held a friendly basketball game was in September 1999 under South Korea’s liberal Kim Dae-jung administration and when Kim Jong-il, current leader Kim Jong-un’s father, ruled the North. The game was held in Pyongyang. In December 1999, North Korea’s basketball team visited Seoul for a second game. The third and last game was in 2003 in Pyongyang.

Aside from inter-Korean sports exchanges, the International Olympic Committee announced earlier this month that athletes from both Koreas, China and Japan will gather in Lausanne, Switzerland, this Saturday for a mixed table tennis friendly hosted by the sports body in commemoration of Olympic Day. Two athletes from each nation are expected to play.

Today and tomorrow, a 17-member delegation from the South will visit the North Korean border town of Kaesong to prepare for the opening of an inter-Korean liaison office there, another agreement signed in the Panmunjom Declaration.

On Friday, both Koreas will hold a meeting at North Korea’s Mount Kumgang to discuss a reunion of families separated by the 1950-53 Korean War. The last time a family reunion was held was in December 2015. In the Panmunjom Declaration, the two countries agreed to hold one on Liberation Day, Aug. 15, when Korea earned independence from Japanese colonial rule.