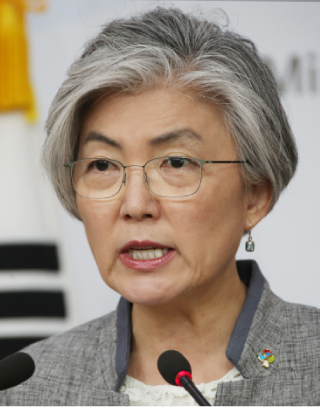 South Korea aims to formally end the Korean War within this year but will be flexible on the specific timing and format, as the process requires consultations with Pyongyang and Washington, Seoul’s top diplomat said Monday.

Speaking to reporters shortly after a telephone conversation with U.S. Secretary of State Mike Pompeo, Foreign Minister Kang Kyung-wha said the Trump administration is willing to declare a formal end to the 1950-53 conflict, which was agreed between the leaders of the two Koreas in April.

“I think [we] need to produce a result through consultations with the U.S., and North Korea. But [South Korea] plans to handle the issue of timing and format with flexibility,” she said at a press conference. Kang described officially ending the war as the “entrance” to a process to establish a peace regime on the peninsula.

She quoted Pompeo as saying that his talks with the North to follow up on the Singapore summit deal between President Donald Trump and the communist nation’s leader Kim Jong-un will proceed speedily.

On a proposed “hotline” between Trump and Kim, Kang said its establishment does not seem imminent.

Pompeo told Kang that there’s no concrete action on the matter, according to the minister. Trump publicly said last week that he gave his “very direct number” to Kim. “I can now call him,” he said. “I gave him a very direct number. He can now call me if he has any difficulty. We have communication.”

Kang expressed hope that she will hold separate talks with her North Korean counterpart, Ri Yong-ho, on the sidelines of the ASEAN Regional Forum, which will take place in Singapore in early August.