3 die in arson at club in Gunsan

3 die in arson at club in Gunsan 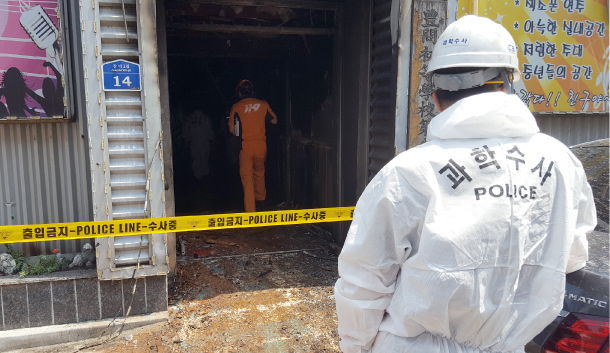 Forensics analysts from the police and fire department inspect the site of the deadly blaze on Monday that killed three and injured 30 at a nightclub in Gunsan, North Jeolla. [YONHAP]

Three people died and 30 others were injured on Sunday when a 55-year-old commercial sailor set fire to a nightclub in Gunsan, North Jeolla, after quarreling with its owner over an unpaid tab.

The sailor, surnamed Lee, was a frequent patron of the club and had an unpaid tab of 100,000 won ($90). When questioned by the police, Lee admitted setting fire to the club with gasoline after quarrelling with its owner, whom he claimed wanted him to pay 200,000 won to clear the debt.

A witness called the Gunsan police at around 9:50 p.m. on Sunday reporting that a person poured gasoline and used a lighter to set fire to an entrance of a single-floor drinking establishment in Jangmi-dong. Over 140 firefighters were immediately deployed.

By the time firefighters arrived on the scene, the building was already consumed in flames, and some patrons had escaped through an emergency exit at the back. Firefighters spent an hour conducting rescue operations and putting out the blaze, which took around an hour.

An investigation by the fire department revealed that the carpeted floor of the club rapidly carried the flames inward, and narrow hallways and closely packed furniture made it difficult for patrons to escape. Since the fire was started at the building’s entrance, panic ensued as patrons looked for another way out. Bodies were found at the emergency exit and on a stage when the firefighters entered the building. Victims were immediately transported to different hospitals in the area, and some residents of the neighborhood assisted firefighters in treating and transporting the injured. 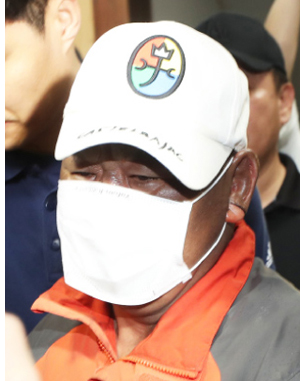 A 47-year-old person surnamed Jang is among the three who died in the fire, and five of the injured are said to be in critical condition. Around 280 square meters (3,014 square feet) of the building’s interior was burned, incurring around 35 million won in property damage.

Police tracked Lee down in just over three hours and arrested him at the residence of one of his coworkers in Gunsan at around 1:30 a.m. Monday morning. Lee suffered burns on his abdomen from setting the fire and was treated after his arrest. The police said they will request a warrant to detain him on charges of arson. The club catered to middle-aged customers and featured live performances of music from the 1970s and ’80s.

This was the third major building fire in Korea within a year, after a fire at a sports center in Jecheon, North Chungcheong, in December and a hospital in Miryang, South Gyeongsang, in January. The first left 29 dead and the second 46.