Korea lost 1-0 in its first 2018 FIFA World Cup match against Sweden at Nizhny Novgorod Stadium in Russia on Monday. 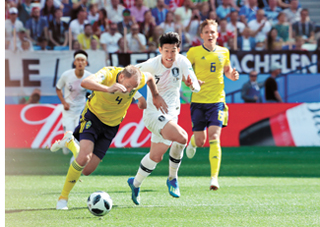 Son Heung-min, in white, competes for the ball during Korea’s first 2018 World Cup match against Sweden at Nizhny Novgorod Stadium on Monday. Korea will play its second match against Mexico on Saturday local time. [YONHAP]

Korea’s head coach Shin Tae-yong was well aware that the opening match against Sweden was a must-win for Korea to have a shot at advancing to the round of 16. He said the team gave it their all while training for the game.

Up until the 63rd minute, the two teams were locked at 0-0. But Kim Min-woo’s foul on Viktor Claesson in the box at the 65th minute decided the match. Originally, the referee continued the match, but he was asked for a review by the video assistant referees, introduced for the first time at the World Cup this year. Kim, who plays for the Suwon Samsung Bluewings in the K League 1, was determined to have fouled Claesson, as he tackled him without touching the ball.

“I thought Kim Min-woo touched the ball first and then took [Claesson] down,” head coach Shin Tae-yong was quoted as saying by Yonhap after the match. “But I think we still have to respect the referee’s decision.”

Shin made a last-minute effort to square the match by putting in forward Lee Seung-woo of Hellas Verona in the 73rd minute, but Korea still wasn’t able to score a goal.

“Because we were going up against a tall team, we wanted to negate some of the disadvantage in set pieces [by starting Kim Shin-wook],” Shin said. “Once we got used to playing against taller defenders in the second half, we were hoping to penetrate behind their defense using our speed. But it didn’t work as well as we’d hoped.”

Throughout the match, Korea, ranked 57th, was far behind the 24th-ranked Sweden in shots on target, as Korea only had five shots with none on target, while Sweden had 15 attempts with four on target.

“We lost even though we prepared so much for this match, and we played really hard,” said Shin.

With the loss, Korea is now ranked last along with Germany in Group F, with 0 points. Korea’s goal of advancing to the round of 16 is much less likely now, as the team will have to win against both Mexico, ranked 15th, and Germany, the defending champions.

“It’s not over,” Son Heung-min was quoted as saying. “I hope the players don’t get discouraged with the loss. Of course, it’s going to be difficult but we’ll work hard to prepare for the next match.”

Despite the loss, Korea’s goalkeeper, Jo Hyeon-woo of Daegu FC, had an impressive World Cup debut, coming through with a number of strong saves throughout the match.

Jo was added to the national team in November 2015, but it wasn’t until November 2017 that he got on the field during a match. In his first two years with the national team, Jo warmed the bench as a backup to goalkeepers who played in foreign leagues. When Jo was finally given the opportunity last year, he played well, blocking a number of shots on goal.

Though Jo wasn’t able to stop the penalty kick, he protected the net well during the rest of the game. After the match, Sweden’s head coach Janne Andersson said Jo was “South Korea’s best player today.”

“I did have some nerves,” Jo said. “But my teammates gave me lots of energy and I wasn’t afraid. I just wanted to play without regrets.”

Jo grabbed the attention of local and international media even more than Son Heung-min, a starting striker for the English Premier League’s Tottenham Hostpur.

“We have to regroup and focus on our next match in a few days,” Shin said. “Against Germany, Mexico showed great speed and skills, and they had excellent counterattacks. I think they’ll be tough to play, but I also think they’ll play a different style than they did against Germany. We’ll prepare hard for that match.”

Korea will play its second group match against Mexico at Rostov Arena in Rostov-on-Don on Saturday, local time. Mexico and Sweden currently lead in Group F, as Mexico defeated Germany 1-0.

Then, Korea will conclude the group match against top-ranked Germany on June 27.