A good job must have some work-life balance

A good job must have some work-life balance 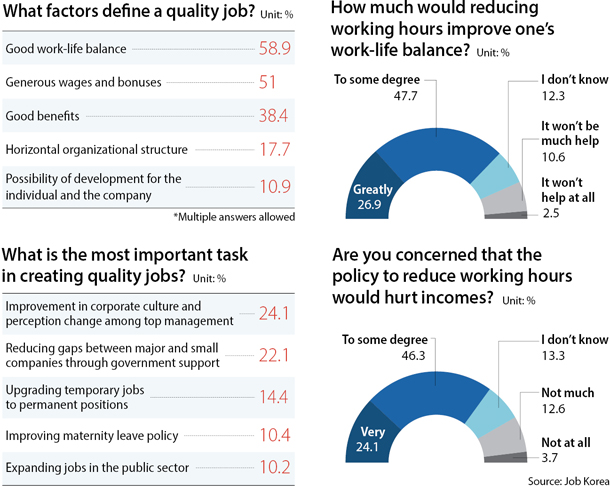 Work-life balance was voted as the No. 1 factor in defining a “quality job,” according to a survey Tuesday by the job search website Job Korea.

Creating more “quality jobs” is one key pledge of the Moon Jae-in administration. The term refers to stable, long-term positions that have decent pay.

Among Job Korea’s 2,927 survey participants, 58.9 percent said the most important factor in defining a quality job was whether it ensured a work-life balance. Ranked second place was high compensation, voted by 51 percent of the respondents. Multiple answers were allowed. Good benefits (38.4 percent) and a horizontal organizational culture (17.7 percent) followed.

The tendency to prioritize work-life balance was particularly strong among the 30s age group, who are often managers with significant responsibility. Sixty-one percent of that age group voted for work-life balance. The 20s and 40-years-and-above age group followed this tendency, but teenagers, who have less work experience, preferred generous financial rewards (52.6 percent) and good benefits (50 percent).

Half of the respondents said there weren’t many quality jobs in Korea.

To create more quality jobs, 24.1 percent said there should be a perception change in top management, followed by improvements in corporate culture. Narrowing the gap between major and minor companies based on government support was voted by 22.1 percent.

The survey also asked for opinions on the policy to reduce working hours to 52 hours a week, which goes into effect next month.

The Moon administration hopes the shorter workweek will give more free time to workers and drive companies to hire more people. But labor-intensive industries have been complaining that a hurried implementation may bring bad ripple effects.

Nearly half of the respondents said that the shorter workweek would be effective in increasing jobs for younger people. Seven out of 10 said that it would help improve work-life balance.

However, seven out of 10 expressed concerns that fewer working hours would eventually lead to less income. Twenty-four percent said they were very worried about the policy.