Restoration of Deoksu Palace begins : Buildings are set to be restored to their original glory by 2038

Restoration of Deoksu Palace begins : Buildings are set to be restored to their original glory by 2038

Clockwise from above left: Imperial guards lower the signboard for Gwangmyeongmun at a kick-off ceremony for work to move the gate back to its original site; the gate in its original site was the gate for the palace’s main building. It was relocated and used as a storage site for artifacts. [YONHAP, CULTURAL HERITAGE ADMINISTRATION]

For 13 years, Deoksu Palace was the main palace for the short-lived Korean Empire (1897-1910). When Emperor Gojong passed away in 1919, the palace’s glory swiftly dwindled along with the sovereignty of the empire.

The gate of the palace’s main building, Gwangmyeonmun, was relocated to make way for an art museum, and became a storage site for artifacts. Dondeokjeon, a western-style building on the palace grounds, was demolished to become a children’s playground. Seonwonjeon, where the former kings’ portraits were enshrined, was destroyed in a fire in 1900.

Determined to restore the palace back to its former majesty, the Cultural Heritage Administration of Korea has begun a series of reconstruction projects to restore these iconic pieces of architecture back to their original glory. 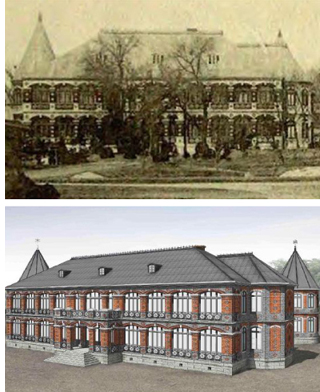 Top: Dondeokjeon was originally used as a banquet hall for the Imperial Family. Above: A 3-D rendering of Dondeokjeon after it is restored. [CULTURAL HERITAGE ADMINISTRATION]

The project started yesterday with a ground-breaking ceremony for works to move Gwangmyeongmun back to its original site. The gate’s original site was unearthed in 2016 to check whether the architectural remains were still standing.

Yesterday, a solemn Confucian ritual took place at Deoksu Palace calling for the blessing of heavenly and earthly deities, followed by a ceremony in which the gate’s signboard was removed to mark the beginning of its reconstruction.

Three artifacts previously stored within the gate - a bell, a hwacha (a 16th century rocket launcher), and a jagyeongnu (a 15th century water clock) - will be moved and exhibited in the National Palace Museum of Korea.

Constructed in 1902 to commemorate Emperor Gojong’s 40th year on the throne, Dondeokjeon served a variety of functions. It was the banquet hall for imperial celebrations, the reception hall for emissaries, and lodging for state guests. In 1907, the building was even the enthronement site for Emperor Gojong’s successor and last Emperor of Korea, Sunjong.

The building was gradually sidelined after Emperor Sunjong moved his place of residence to Changdeok Palace. It was ultimately demolished with the renovation of Deoksu Palace as a playground.

Reconstruction will begin within the year, and after its restoration, Dondeokjeon will be used as an archive to store documents related to the Korean Empire.

When Gojong declared himself emperor in 1897, the newly constructed Seonwonjeon was the piece de resistance of Deoksu Palace. A shrine for the portraits of past kings of the Joseon Dynasty, it reaffirmed the legitimacy and tradition of the new empire.

The original building was lost to fire in 1900. It was then reconstructed north of the residence of the American ambassador and it was then demolished in 1919.

The restoration to Deoksu Palace, set to be complete in 2038, will commence in three stages. First, the reconstruction of Seonwonjeon and 54 other auxiliary buildings, followed by the rear garden and the surrounding walls.