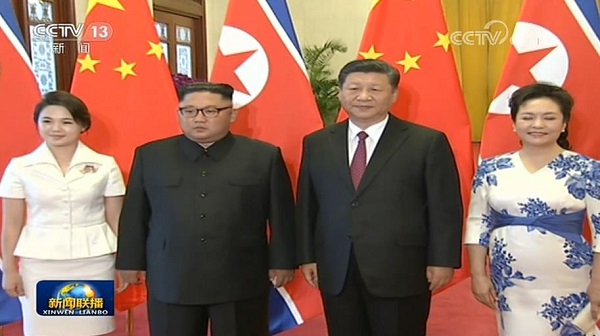 North Korean leader Kim Jong-un landed in China on Tuesday for a two-day visit to the country, his third since assuming power in December 2011. He met with Chinese President Xi Jinping and exchanged “candid and in-depth” views on Beijing-Pyongyang relations and affairs related to the Korean Peninsula, according to Chinese state media.

Xinhua News Agency reported in a brief article that both leaders agreed to “safeguard, consolidate and develop” China-North Korea relations, and “jointly push forward the sound momentum of peace and stability” on the peninsula to make a “positive contribution to safeguarding world and regional peace, stability, prosperity and development.”

China Central Television, the national broadcaster, aired footage of their meeting at the Great Hall of the People in Beijing. Xi and his wife, Peng Liyuan, greeted Kim and his wife, Ri Sol-ju, as the North Korean leader inspected a Chinese honor guard. It was the first time that China reported on Kim’s visit to the country before his return to the North. North Korean state media, which typically reports on Kim’s travels after he has returned from them due to security reasons, didn’t make any mention of the trip on Tuesday.

Nikkei Asian Review, a Japanese outlet, initially broke the news on Tuesday morning that Kim was about to land in Beijing to brief Xi on his recent summit with U.S. President Donald Trump in Singapore and discuss a “negotiating strategy” with him.

The last time Kim visited China was in early May, shortly after his summit with South Korean President Moon Jae-in. The North Korean leader traveled by personal jet to China’s northeastern coastal city of Dalian, where Kim and Xi agreed to boost mutual cooperation amid a whirlwind of diplomacy on the Korean Peninsula.

His first visit, made on a personal bulletproof train, was in late March, one month before his summit with Moon, and took place in Beijing. Kim has timed his visits to China in between major summits and right ahead of meetings with U.S. Secretary of State Mike Pompeo, an indication of the young leader’s strong reliance on Xi as a bargaining chip in denuclearization talks with the United States.

Pompeo expects to travel to the North Korean capital of Pyongyang for a third visit this week to follow up on the agreement that Kim and Trump signed during their summit on June 12. The two leaders promised to have their officials meet at the “earliest possible date” to implement decisions made at the summit.

A timeline wasn’t specified, but Trump told reporters in a news conference after the summit that officials from both countries would get together this week “to go into the details.”

Analysts widely believe Kim is trying to seek security assurances and political backing from Xi as leverage against the United States. China, on the other hand, will likely try to shore up its role in ongoing talks and exert influence on peninsular affairs.

Trump brazenly showed dismay of Xi’s influence on Kim in late May when he told reporters he was “a little disappointed” about Kim’s apparent change of posture after his second meeting with Xi, saying there was “a little change in attitude” from the North Korean leader, without going into the details.

Two days later, Trump pulled out of his planned summit with Kim. The leaders’ meeting was back on only after Kim dispatched a special envoy to Washington to hand-deliver a personal letter to Trump on June 1.