Pompeo hints at another summit, trip to Pyongyang

Pompeo hints at another summit, trip to Pyongyang 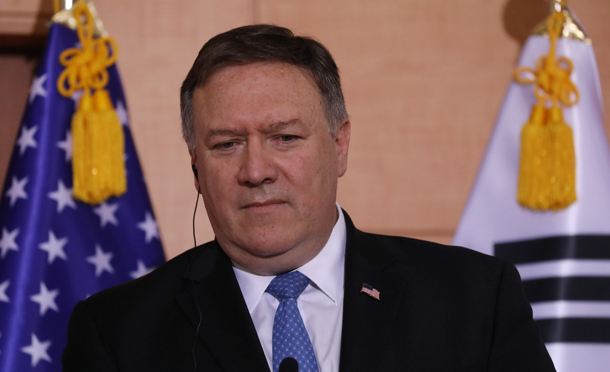 U.S. Secretary of State Mike Pompeo said on Monday that he would probably travel to North Korea “before too terribly long” to follow up on last week’s historic summit between the two countries’ leaders.

Speaking at an event in Detroit, Pompeo said a lot of work remains to be done to flesh out the details of an agreement signed by U.S. President Donald Trump and North Korean leader Kim Jong-un.

“There’s a lot of work between here and there,” he said, referring to the possibility of a second summit. “My team is already doing it. I’ll likely travel back before too terribly long.”

Pompeo traveled twice to Pyongyang in recent months to lay the groundwork for the summit, which took place on June 12 in Singapore. In Trump and Kim’s joint statement, Kim reaffirmed his commitment to “complete denuclearization” of the Korean Peninsula, while Trump promised to provide security guarantees to the regime.

“He has made very clear his commitment to fully denuclearize his country,” Pompeo said, adding that refers to “everything,” not just the weapons system. “In return for that, the president has committed to making sure that we alter the armistice agreement, provide the security assurances that Chairman Kim needs … President Trump is committed to delivering on that part of the bargain as well.”

Pompeo was referring to the cease-fire agreement that ended fighting in the Korean War. North Korea has sought to replace the armistice with a peace treaty to formally end the conflict. The United States, which fought alongside South Korea, is a signatory to the armistice, along with China and North Korea.

In a phone conversation on Sunday, Pompeo and South Korea’s foreign minister, Kang Kyung-wha, discussed next steps after the Singapore summit and reaffirmed the allies’ commitment to the goal of complete, verifiable and irreversible denuclearization, the State Department said in a statement. They also agreed to maintain close coordination and keep pressure on North Korea until it denuclearizes.