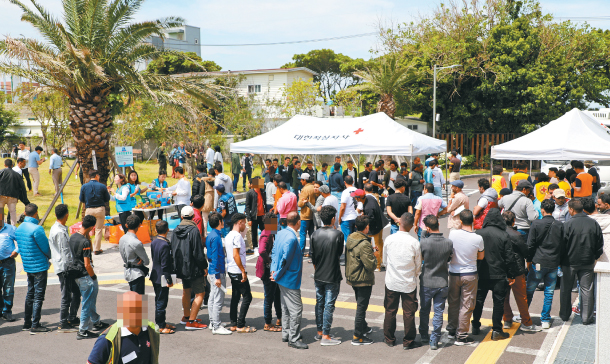 The global dilemma of how to deal with refugees has reached Korea, with more than 250,000 people signing a petition to the Blue House demanding it clamp down on a wave of refugees - Yemenis fleeing civil war to land on Jeju Island.

“With the enactment of the refugee act,” the petitioner wrote, “asylum seekers can stay in the country with no constraints during a deliberation process to grant the asylum status.

“But [allowing those] to seek asylum status is premature [for the country],” the petitioner continued. “I have serious doubts over whether granting asylum status and providing livelihood support for them would enhance the security of locals and help the local Jeju economy.”

The petition, posted on June 13 through a social media account that doesn’t reveal a name to the public, has garnered more than 250,000 signatures as of Tuesday, surpassing the 200,000 milestone in less than a week.

The Blue House is obliged to give a formal response to a petition that has received 200,000 signatures or more in one month, raising interest as to what the reaction of President Moon Jae-in, a former human rights lawyer, will be.

Hundreds of comments on the petition reflect Koreans’ uneasiness about an influx of refugees, with one that read, “Please consider Korean nationals first.”

The issue of refugees in South Korea, which signed the 1951 UN Refugee Convention in 1991, has risen as the number of Yemenis seeking asylum has dramatically increased this year.

The Yemenis normally flew on a direct flight from Malaysia to Jeju, taking advantage of a visa-free program for 30 days adopted by Jeju in 2002 to support tourism on the resort island.

Yemenis fly to Malaysia as their first destination as it allows them to stay 90 days visa-free. But Malaysia has not signed the UN Refugee Convention.

Under Korea’s refugee act, enacted in 2013, asylum seekers can submit applications at airports or shipping ports upon arrival and can receive legal counsel during the process of seeking asylum. 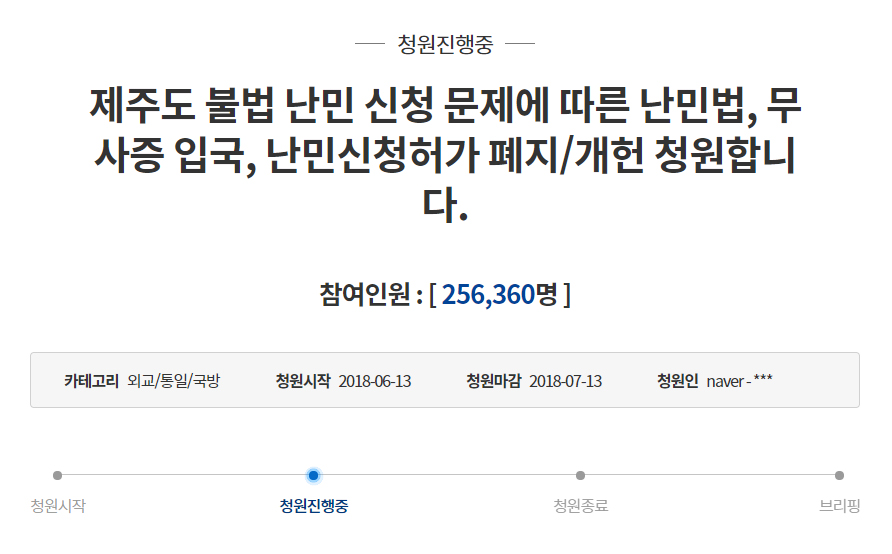 A petition to the Blue House demanding it clamp down on a wave of Yemini refugees fleeing their country’s civil war on the resort island of Jeju has garnered more than 250,000 signatures as of Tuesday, less than a week after it was posted. [SCREEN CAPTURE]

Korea was the first Asian nation to enact such a law for refugees. Before the 2013 enactment, foreigners seeking asylum had to visit a local immigration office, making it impossible for those without visas to enter the country.

Asylum seekers can work in Korea six months after they submit their applications. To address livelihood issues among some 500 Yemenis in Jeju, the provincial government has allowed them to take jobs prior to the six-month mark and introduced them to potential workplaces, such as local restaurants.

But as the number of Yemenis on Jeju swelled by the hundreds in recent years, concerns have been rising in a homogenous country not familiar with the refugee issue and located far from the Middle East.

Responding to growing concerns, the Justice Ministry on April 30 placed a ban on Yemeni asylum seekers from leaving Jeju for other parts of Korea. And on June 1, it added Yemen to a list of nations whose citizens are required to have visas to enter Jeju.

With its addition to the list, Yemen is among 12 nations including Iran and Syria whose citizens cannot enter Jeju without visas. But they can still apply for asylum if they reach Jeju Airport.

A total of 32,733 people have applied for asylum to the Korean government since April 1994, when it first began accepting such applications, according to the Justice Ministry.

Of the total, only around 800 have been granted asylum over the past quarter century, a 2.4 percent approval rate.

Jeju’s provincial government said Tuesday it will deal with the Yemeni cases on humanitarian grounds while tightening security conditions around Yemeni settlements to alleviate people’s concerns about public safety.

The country’s only special autonomous government also said it would allow Yemenis to leave the island to seek medical treatment on humanitarian grounds if necessary. Shin Jang-sik, secretary general of the minor progressive Justice Party, said the government should better educate the public about the refugee issue.

“Considering the size of our economy and standing in the global community, a discussion on refugees is long overdue,” he said. “The Moon government should strive to assuage a public wary of refugees in the country by emphasizing universal human rights, which is a very challenging but necessary mission, while providing assistance to those in need.”