Over 700 fire ants found in port

Over 700 fire ants found in port 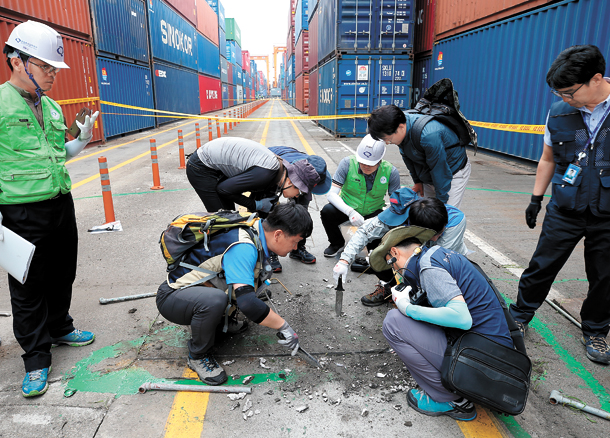 Officials from the Ministry of Environment and Rural Development Administration, along with outside experts, inspect the site on Tuesday where red fire ants were discovered at a container yard in the Port of Pyeongtaek a day earlier. [YONHAP]

Korean authorities discovered more than 700 venomous red fire ants inside a cargo container yard at the Port of Pyeongtaek in Gyeonggi on Tuesday, less than a month after the invasive species was found in a shipping container in Busan.

Quarantine officials first reported three worker ants on a container’s surface while inspecting shipments on Monday afternoon and found a dozen more inside a crack on the concrete floor of the yard shortly after. Officials immediately sterilized the vicinity.

About 700 more were found in the crack on Tuesday, along with several larvae. It is the largest infestation yet of red fire ants in Korea. Authorities have yet to locate the queen ant.

“It appears the red fire ants spent the winter here after arriving at the Port of Pyeongtaek last fall,” an official from the Animal and Plant Quarantine Agency said after Tuesday’s inspection. “But they do not appear to have multiplied rapidly due to the concrete’s inhospitable environment.”

Red fire ants range in size from 2 to 6 millimeters and are found in 26 countries, including Australia, China and the United States. Their stings can cause a burning sensation and lead to itchy sores. People with allergic reactions to the venom can go into life-threatening shock. Over 80,000 cases of red fire ant bites are reported each year in the United States. Around 100 of them result in deaths.

This is the sixth case so far of red fire ants in Korea. Quarantine officials discovered 25 ants in a storage container at Busan’s Gamman Port last September, and in the most recent case, two were found in the Port of Busan.

Authorities in Pyeongtaek sprayed the five-meter (16.4-foot) area where the ants were found with pest-control chemicals. All containers within 100 meters of the location were quarantined, and access was only allowed after sterilization.

The Animal and Plant Quarantine Agency believes the red fire ants in Pyeongtaek originated from China, since close to 90 percent of the 640,000 twenty-foot equivalent-unit containers that enter the port each year come from China.

In the most recent case in Busan, the insects were found inside a container of dried bamboo from Fuqing, China.

Quarantine authorities said they plan to designate an area up to 100 meters from the discovery site as an area for long-term control and spray ant poison after closer inspection.

“As the temperature rises, red fire ants are finding it easier to reproduce and survive,” a quarantine official said, advising the public to inform authorities immediately if more are found.