Radioactive mattresses have a city up in arms

Radioactive mattresses have a city up in arms 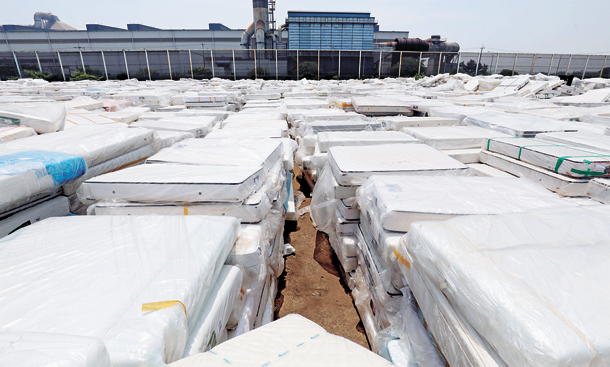 Mattresses from Daijin Bed sit in a storage yard in Dangjin, South Chungcheong, on Tuesday. The Korea Post collected the mattresses from all over the country after a study found they emitted levels of radon beyond government safety standards. [KIM SUNG-TAE]

Residents of Dangjin, South Chungcheong, are fuming over the government’s decision to dump mattresses tainted with radioactive material in one of the city’s storage yards.

“We don’t live in a dictatorship anymore!” protesters shouted outside the yard, where they had been camped out for three days, on Tuesday. “You think the government can do whatever it wants?”

Over the weekend, the Korea Post transported 16,900 mattresses to a yard in Dangjin at the order of the Prime Minister’s Office and the Nuclear Safety and Security Commission. The mattresses were all manufactured by Daijin Bed and released radon, a radioactive gas known to cause lung cancer, at levels exceeding government safety standards. The finding last month forced the company to recall the mattresses, and the Nuclear Safety and Security Commission took charge of collecting them earlier this month.

More than 100 residents gathered outside the yard on Sunday with placards that read, “Get rid of radioactive radon mattresses immediately,” and, “Against the illegal handling of Daijin Bed.” Their mistrust of the government has since reached a new high, with some saying they will fight “over their dead bodies.” The protesters want the mattresses removed from their area.

The yard, which was open just a day earlier, was fenced off on Tuesday with iron gates, preventing cars and people from entering. Stacks of five or so mattresses lined the yard for more than 100 meters (330 feet). Some had their plastic covers torn off.

“The secretive way with which the government dealt with this is to blame for residents’ anxiety,” said Yoo Jong-jun, executive secretary of the Dangjin branch of the Korea Federation for Environmental Movements. “This could have been easier, but they messed it up.”

Yoo said the government should have prioritized safety over speed in dealing with the tainted mattresses. “The government took President Moon Jae-in’s call for a ‘quick disposal’ to mean they should get this done as fast as possible without even consulting with residents,” Yoo said. “If it’s difficult to move the mattresses somewhere else, they should ask the residents time and again for their approval.”

The Dangjin city government said it did not find unusual levels of radioactivity when it checked 350 trucks that transported the mattresses to the yard on Saturday.

Consumer safety experts say the panic that has resulted from the Daijin Bed scandal is excessive. Residents should not worry about the mattresses in the yard because exposure is harmful indoors but less so outdoors, they argue.

Thoron has practically no impact on the human body. Radioactivity decreases significantly one meter away from the gas, scientists say. The mattresses were only a problem when used indoors.

The commission said that it was reviewing methods of disposing the mattresses according to the law.