Taeguk Warriors can relax with a cold beer

Taeguk Warriors can relax with a cold beer 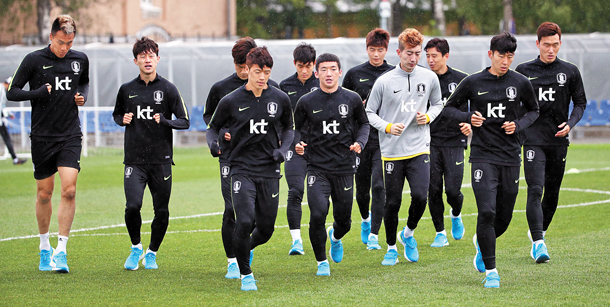 While each team at the 2018 World Cup will have its own do’s and don’ts, Korea isn’t liberal when it comes to rules for the World Cup.

For instance, Sweden, Korea’s Group F opponents, reportedly allowed their players to meet with their family members and stay with them until Wednesday.

Choi Young-il, vice president of the Korea Football Association (KFA) who serves as the chef de mission for the Korean delegation to the World Cup, said it’s just too early for Korea to allow wives and girlfriends, which people like to call “WAGs,” to travel with players during the tournament.

“Considering public sentiment on the national team, it’s just difficult for us to allow that,” said Choi, a former defender who captained team Korea at the 1998 World Cup. “If we are a team that can reach the round of 16 regularly, the players meeting their family members and girlfriends at the team hotel may be accepted, but still, we have to think of fans’ perspectives.”

Meeting loved ones can help players get rid of stress going into the tournament. Defender Kim Young-gwon, who was criticized by fans in the past after saying that he couldn’t communicate with teammates well on the pitch because of noise from the fans, said that his family gave him the energy to overcome the hard times.

While Koreans may need some energy from their loved ones after suffering a painful 1-0 defeat against Sweden, Choi said it would be a problem if the national team allowed family members to travel with the players.

“It’s difficult to set standards on who should travel or not travel with the players,” he said. “There are players who are married and not married, and should we allow only their parents, or just wives?”

And there’s another issue: money.

“It gets too expensive if we cover the travel cost of the players’ family members,” he said. “And whether we pay or not, fans will criticize us.”

Choi, however, said Korea aren’t blocking players from meeting with their loved ones during the tournament.

“Even in the past, we had our family members visiting the stadium, or the team hotel, and the players met them,” he said. “If they come to the front of the hotel, who’d say ‘no’ to the player?”

Choi, 52, said players these days know ways to talk with their family or girlfriends. Mostly, they use video chat programs through their mobile devices in their rooms.

“Each player gets their own room, and you have no idea what they’re doing in their room with smartphones,” he said. “Unlike in the past, when the players shared a room, the players now can have privacy, and I’m sure they speak with their loved ones through smartphones.”

“The players can feel bored overseas, and it’s important for the players to maintain their fitness,” Shin said. “The players these days look like they love smartphones more than the coach. They’re adults and I can’t imagine them not using smartphones during the World Cup, but I won’t allow social media use.”

Another restriction for the Korean team is drinking. It may seem obvious that the players have to control their drinking during the tournament, but there’s no written rule that prohibits drinking for the national team.

“The players know how to behave, and we don’t have a rule on drinking,” said Cho Jun-heon, Korea’s media officer for the World Cup. “The players could have a glass of beer inside their hotel after a match, but before the match, it’s hard to imagine that they will drink alcohol.”