An emotional step on a spiritual journey : Helena Soholm starts her life as a shaman with a true naerimgut

An emotional step on a spiritual journey : Helena Soholm starts her life as a shaman with a true naerimgut 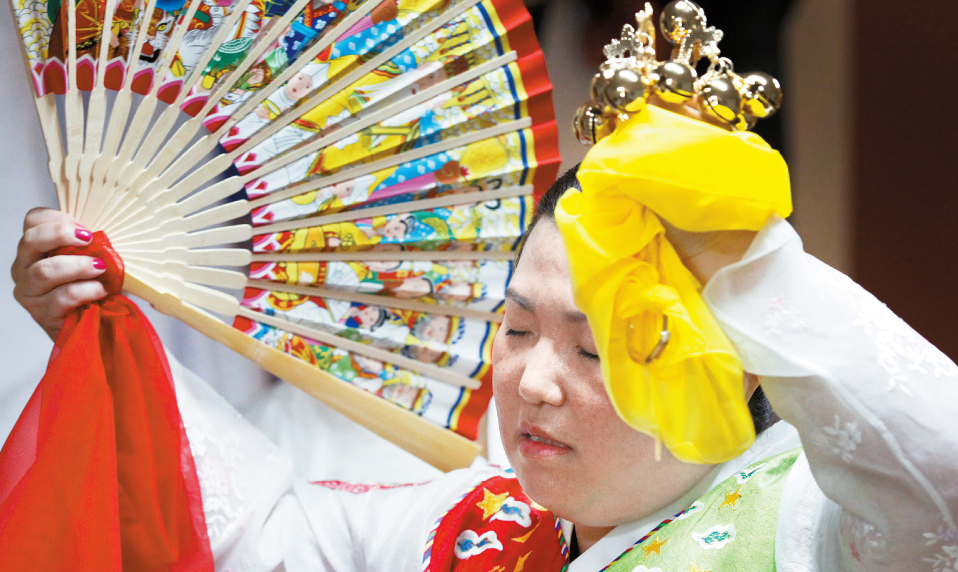 Helena Soholm, a Korean-American who came to Korea to receive a naerimgut (initiation ceremony), holds up a fan and bells in an effort to receive deities on May 19 at a ritual place in Namyangju, Gyeonggi. [PARK SANG-MOON]

On the morning of May 19, Helena Soholm nervously sat down in front of her spirit mother, who brushed Soholm’s hair back nicely into a bun. Then she stood up and dressed herself in a pure white hanbok, or Korean traditional dress, as if she was getting ready for a wedding. But instead, she was preparing to receive naerimgut, an initiation ceremony in Korean shamanism.

“You have to make your body and mind chaste and pure as if you are getting married to the gods,” said Soholm’s so-called spirit mother Kim Jung-hee, who is an active Korean shaman in Seoul.

Soholm, 40, is a Korean-American who works as a psychotherapist in Seattle. Coming from a very strong Christian family, Soholm says most of her childhood days were spent at church, even playing the piano for the church choir.

After studying psychology and religion during her undergraduate years, she went on to do a masters program in theology at Harvard University. That is when she became interested in shamanism.

“I didn’t know about the term shamanism or Korean shamanism before I went to a divinity school,” she said. “At Harvard, I met a professor who was a former priest-turned-scholar. He left the priesthood, married his wife and he was studying shamanism as a research topic. I enrolled in his class and that is when I learned about the formal studies of shamanism. Instantly, I felt like this was the thing that I needed to study.”

From a young age, Soholm says she’s been having mystical dreams, dreaming about making contact with the spiritual world. As she got older, she began dreaming about things that would happen in the future.

“If I meet somebody, for example,” said Soholm, “I would have a dream about them and get information about them that they didn’t tell me. I began to have such intuitive knowledge and they’ve just been growing stronger and stronger as I got older.”

Usually, those who felt tormented by a so-called spirit illness in Korea look for different ways to be treated, but end up admitting that the affliction marks a call to become a shaman, or mudang in Korean, and receive naerimgut.

Her spirit illness hasn’t been as serious as other traditional shamans, but Soholm says her health has been deteriorating, especially after deciding on the naerimgut date.

“Deciding on receiving naerimgut took a long time for me because I never considered myself that way. I thought I was just intuitive,” recalled Soholm. But after years of research and interviews she did with Western shamans, she realized that the stories she gathered mirrored her life.

“The first similarities between [myself and] the interviewees was that they were very different as children,” said Soholm. “They never fit in anywhere. They felt like their family didn’t understand them. They felt different and were ostracized from society.”

“I also struggled with depression for many years because I felt so misunderstood,” she continued. “I grew up with a single mother because my parents separated when I was only three. When I was nine, my family, including my mother and younger brother immigrated to America. My mother was working and I was lonely.”

While continuing to research spirituality and healing, she had a Skype session with Kim, to whom she was introduced by her Russian friend.

“As soon as I saw Helena on Skype, I asked her if she had received naerimgut because she was just surrounded by different deities,” said Kim.

Kim says that people outside of Korea also suffer from spirit illnesses of different kinds and levels but they usually don’t realize that it is spiritual illness because of their lack of shaman culture. Because Soholm immigrated to the United States when she was nine and grew up there, she is quite similar to other Western shamans Kim has performed naerimgut on, explained Kim.

Kim is one of the few Korean shamans who travel to other countries to participate in different shamanism festivals and conferences. Because of her connection to other shamans across the world, many people interested specifically in Korean shamanism also visit Korea to receive gut, or shamanistic rites, from Kim.

From left: Helena Soholm’s spirit mother Kim Jung-hee ties Soholm’s hair into a bun to get ready for the initiation ceremony; a Korean shaman plays the janggu (double-headed drum) as she sings and chants out prayers with basic information about Soholm given to her; Soholm tries to receive deities while other shamans surround her to support her. [PARK SANG-MOON]

For the big day

Soholm arrived in Seoul about a week before her naerimgut. She stayed at her spirit mother’s home and went to Gwangjang Market in central Seoul to purchase the white hanbok. She also visited Mount Inwang in central Seoul - known as one of the most sacred places for shamans to pray - to prepare her body and soul for the ceremony.

Kim rented a room at Guseonbong Gutdang, a commercial ritual space in Namyangju, Gyeonggi, for Soholm’s naerimgut on May 19. After getting Soholm ready for the ceremony, all of the shamans participating in Soholm’s ceremony gathered for breakfast together. Although it was the only meal Soholm could have that day, she didn’t have a bite.

“I had not been eating very much leading up to the ceremony,” said Soholm. “That day, I did not eat or drink anything, as I heard that it would be difficult physically since I would be constantly moving and jumping up and down in order to receive deities and be possessed by them.”

At around noon, Soholm’s naerimgut finally began with one of the shamans playing the janggu, or traditional Korean double-headed drum. She began drumming and singing prayers and chants, and a few minutes later, Soholm, who was sitting on the floor in front of the altar, went straight into receiving deities.

For the first few hours, Soholm had difficulty receiving the deities. Two other shamans and Kim continued to help Soholm by encouraging her to keep on jumping and moving around, empty her mind and relax so that she could be clearly and strongly possessed by the right deities and ward off evil spirits.

About three hours into the naerimgut, several deities began to appear through Soholm.

“I’m the heavenly maiden,” replied Soholm, who suddenly spoke with a softer voice and danced like an angel.

“Why are you here?” Kim asked again.

Then Soholm replied in a tearful voice that she came down to help Soholm help the people.

“It’s so painful to watch how fierce this world has become.”

After the ceremony, Soholm said that one of the memorable moments was when she was possessed by the heavenly maidens.

“I felt as if my heart was breaking in half,” recalled Soholm. “I remember not being able to control how sad I felt and needing to just cry.”

During the second part of the ceremony, each of the shamans including Kim provided divination, guidance and support for Soholm’s path. Soholm recalls the divination given to her about her life and herself as “uncanny.”

“My experience at the gut and in the past with Korean shamans is that they are very accurate in their divination readings,” said Soholm.

“They provided not just vague readings but they gave details about things that I haven’t told others before. It’s as if they entered into the deepest part of my psyche and gained a truly accurate understanding of me from the inside out. They are not simply reading me as a person outside of myself. They reflected to me what it was like to be ‘me.’”

Soholm said this experience was comforting and that it felt like the deities truly knew who she was.

The ceremony continued until 9 p.m. Soholm managed to receive all necessary deities to be called a shaman. She also received messages from the gods via one of the shamans present at the naerimgut, which Soholm says were very encouraging.

“I felt heard, seen and known by the deities, as if I have been validated,” she said.

Although her spirit mother hopes Soholm can stay in Korea but understands that Soholm has a different path.

“My path is not to be a traditional shaman,” said Soholm. “What I’ll practice is neo-shamanism, or contemporary shamanism. I won’t be wearing the costumes and do gut. I will be continuing to do my therapy practice but work as a clinician who will be able to help people heal psychologically and emotionally through the use of holistic methods including seeing the spiritual health of modern people.”

Soholm said she had already told her clients before leaving for Korea about her naerimgut and they congratulated her, “which is such a different response to Koreans.”

“Many of my clients found me because I am a researcher in shamanism,” said Soholm. “So when I told them about my naerimgut, they were so happy.”

How did her family react to her becoming a shaman? Her husband was supportive, but her Korean mother, who is a devout Christian, was like many other Koreans who are suspicious of shamans.

“Before the naerimgut, I debated whether to tell her. I decided not to tell her before the naerimgut because I didn’t want to worry her or be bothered during my gut by thinking about her,” said Soholm. “When I told my mother that I’m studying shamanism, she cried. My mother also has the same traits as a shaman but she never became one. So she was always afraid that this might happen one day.”

Soholm said she told her mother about her naerimgut right after coming home to Seattle.

“There is still a strong stigma against shamans in Korea, and due to my family’s background as Protestant Christians, they think I will be going to hell due to my actions,” she said.

Meanwhile, Soholm wasn’t hesitant to point out the drawbacks of traditional Korean shamanism in modern society.

“There are so many shamans in Korea for [being such] a small country and it’s really great to respect shamanism as its cultural heritage,” she said. “But for many shamans here, they become a business and that’s what turns people off. In the West, they have this mindset that if you are a healer, you cannot go after money, because it’s a conflict of interest. But in Korea, a lot of the criticism toward shamans is around moneymaking because so much money is involved.”

Soholm thinks it is important for people to be critical about who you go see.

“I always tell my clients, ‘Don’t listen to what I say, but listen to your own heart,’” she said.

“I believe in helping people help themselves, and that’s going to be the same when I do shaman work, because I don’t know you like you know you. We have to strengthen our own logical mind so that you don’t fall prey to those who can take advantage of you.”