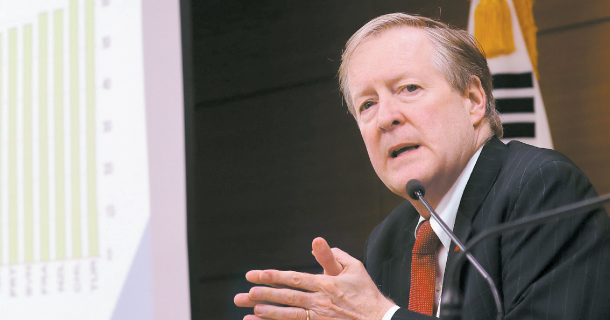 Randall S. Jones, head of the Japan/Korea Desk of the economics department of the OECD, discusses the organization’s latest report on the Korean economy during a press conference Wednesday in the Sejong government complex. [YONHAP]

The Organization for Economic Co-operation and Development (OECD) said it is too early to decide on raising the minimum wage again next year as the impact of this year’s hike can’t be assessed with data from the first five months of 2018.

“The effect of the minimum wage hike is uncertain at this stage,” the OECD said in an economic survey for 2018, a biannual report on OECD member countries’ economies, released on Wednesday. “However, the planned 54 percent increase in the minimum wage during the president’s five-year term is nearly unprecedented among OECD countries, making the impact difficult to predict.

“Unless this is matched by higher productivity, it could push inflation above its target and have a negative impact on Korea’s international competitiveness,” the report went on. “It would thus be best to assess the impact of the 16.4 percent hike in the minimum wage in 2018 before raising it further.”

Assessing the effect of this year’s increase would need more time than data available now, an OECD economist said.

“In the first five months of this year, we saw slower employment growth but this had various causes such as the slowdown in the construction sector due to higher loan-to-value and debt-to-income ratios [which make getting a mortgage more difficult],” said Randall S. Jones, head of the Japan/Korea Desk of the economics department of the OECD during a briefing with Korean reporters on Wednesday at the Sejong government complex. “We also saw a slowdown in the hotel and restaurant and retail and wholesale sectors, which is probably more related to the minimum wage effect.”

Data from Statistics Korea showed that employment in those sectors fell by 101,000 in May.

“For economists, we only have five months of data and this is rather short,” Jones went on.

The report also predicted that Korean economic growth will remain at around 3 percent this and next year, “supported by stronger export growth and fiscal stimulus that offset the impact of tighter regulations on housing and mortgage lending.”

When asked about his assessment of so-called income-led growth, the Moon Jae-in government’s main economic policy platform, Jones said, “Its success will depend on improvement in labor productivity and labor input…innovative growth that includes SMEs [small and medium-sized enterprises] and start-ups.”

“Income-led growth” focuses on inducing economic growth by raising incomes, which is supposed to lead to more spending and a boost to the economy. In turn, that is supposed to lead to companies hiring and investing more. A major part of the policy is raising the minimum wage, which Moon promised would be raised to 10,000 won ($9.04) by 2020.

To increase productivity in the country, the economist said it is vital to level the gap between large companies in the country and SMEs.

OECD data showed that the gap in productivity between large companies and SMEs has widened. SMEs’ productivity compared to large firms stood at 54 percent in 1980. This fell to 32 percent in 2014.

“In some countries - Netherlands, Estonia and Denmark - labor productivity of SMEs is 80 percent or more compared to big companies,” Jones said.

The OECD report recommended that Korea allow companies that are not viable to collapse and let capital and work forces go elsewhere.

While the Korean government has more than 1,000 programs to support SMEs, such as tax breaks and cheaper utility prices, many focus on keeping infeasible companies alive, rather than making them more productive.

“It is also vital that, for SMEs to become more productive, they find proper work forces,” Jones said. “About 82 percent of SMEs in Korea say they cannot find workers, but on the other hand, the employment rate for young people is low, which shows that there is a mismatch problem.”

The OECD also recommended that the Korean government “use taxes that are relatively less harmful to economic growth, notably the VAT [value-added tax], to finance rising social spending.”