YOON SEOL-YOUNG
*The author is a Tokyo correspondent of the JoongAng Ilbo. 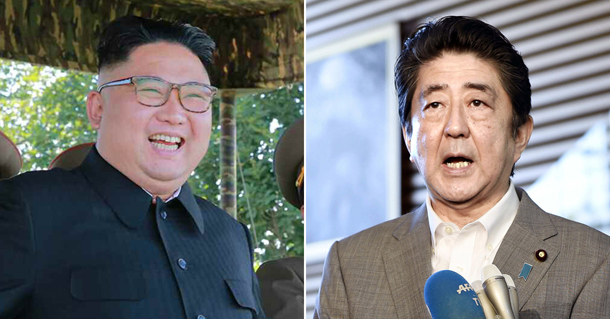 “North Korean leader Kim Jong-un attended the opening ceremony of the Tokyo Olympics on July 24,” a hypothetical article during the 2020 Tokyo Summer Olympics would say. “Kim had a summit with Japanese Prime Minister Shinzo Abe and exchanged views on normalization of North Korea-Japan relations. He also visited the training facility to encourage the athletes of the joint Korean team and attended a welcome event prepared by the members of the General Association of Korean Residents at the Joseon Culture and Arts Center.”
This story may seem to only exist in fiction, but considering Kim’s diplomatic moves, it could be possible.

In fact, there are rumors Kim wants to visit Tokyo. If the reconciliatory mood continues on the Korean Peninsula, it is highly likely that the two Koreas will make a joint team for the Tokyo Olympics, and it would be bigger than at the PyeongChang Winter Olympics. Kim may be imagining himself waving to the athletes from South and North Korea next to President Moon Jae-in. It would also be a great opportunity to broadcast the image of a leader of a normal state that he projected at Panmunjom and Singapore.

What is Japan’s response? Japanese government officials seemed prepared to say it is possible. A government source familiar with North Korean affairs said, “He went to Beijing and Singapore, so there is no reason not to visit Tokyo. Kim’s Japan visit could accelerate Pyongyang-Tokyo relations.” He added that there is no set rule to hold the North Korea-Japan summit in Pyongyang.

It is less of a burden for Japan if Kim’s visit is for a sporting event. The public won’t be happy with the government inviting the leader of a country that has launched missiles over Japan. North Korea and Japan lack diplomatic ties, but the Cabinet can approve Kim’s entry to Japan. It won’t be an issue considering the precedents of North Korean athletes participating in international events.

Japanese Prime Minister Shinzo Abe changed his position on North Korea completely after the Trump-Kim summit. In a television interview on June 17, he said, “I strongly expect Kim Jong-un to make a big decision.” However, citizens know very well that he is only trying to boost his ratings for the Liberal Democratic Party chairman election in September.

Between Abe and Kim is the deep river of the abductee issue. A bridge has to be built over the river to make the summit possible. The work to find a middle ground to save face for both Japan and North Korea has just begun. If successful, Kim will visit Tokyo in 2020 after 29 years. Records show that Kim was seven when he entered Japan with a forged Brazilian passport in 1991. I wonder what the 36-year-old leader would experience in Tokyo.