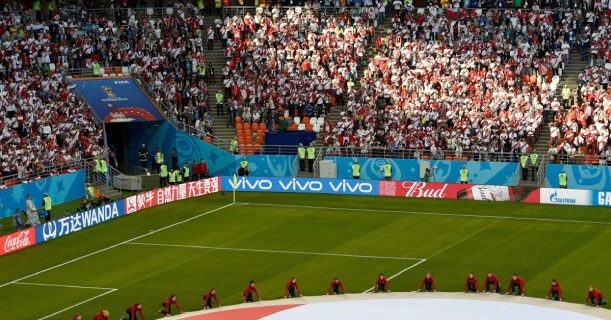 Chinese companies sponsoring the 2018 World Cup are advertised on banners around the field during the first match between Peru and Denmark. [YONHAP]

China isn’t in the 2018 World Cup in Russia - its team lost in the Asian Qualifiers final round. But World Cup fever in China is hot. And at least off the football pitch, the Chinese are dominating World Cup sponsorships.

According to Zenith, a British marketing research company, out of the 2.4 billion dollars in sponsorship fees for the 2018 World Cup, about $855 million came from Chinese companies - over 30 percent of the total.

That’s more than double the amount from U.S. companies ($400 million) and 13 times that of the host country, Russia ($64 million).

Until last year, the Russian World Cup had a hard time getting sponsors. After the FIFA corruption scandal in 2015, companies based in the United States and Europe were hesitant to sponsor the 2018 World Cup.

FIFA struggled to find companies willing to fill the gap - and Chinese companies stepped in.

At the Brazil World Cup in 2014, there was only one Chinese company among the official sponsors. This time there are five. Hyundai and Kia Motors are the only sponsors from Korea. Among Chinese companies, Wanda Group, the largest real estate company in China, spent the most on World Cup sponsorships.

Although FIFA does not officially announce the size of its sponsorships, FIFA partners spend from $22 million to $44 million every year.

Left: The logo of Wanda Group, an official FIFA Partner and the largest real estate company in China, is seen behind a goalpost in the Peru versus Denmark match. Right: An advertisement for Hisense, one of the Chinese sponsors of the World Cup, is visible behind Argentine football player Lionel Messi. [YONHAP]

Among current World Cup sponsors from China are the country’s second biggest dairy producer, Mengniu Dairy, smartphone manufacturer VIVO and home appliance manufacturer Hisense. It is estimated that these sponsors spend between 25 million to 35 million dollars a year each.

Mengniu Dairy is second after Wanda Group. The company, which makes ice cream and drinks such as milk and yogurt, said it will spend at least 2 billion yuan ($308 million) in marketing through its sponsorship of the World Cup. In addition, Yadi, a Chinese electric scooter maker, was named a national supporter sponsor in Asia.

Chinese companies sponsoring the games to promote their brands globally. “Until now, Chinese companies have focused on their domestic market of 1.4 billion people,” said Cho Seong-sik, a professor in Hanyang University’s sports industry department. “However, the leading players in the Chinese market want to expand to the global market, and they are showing interest in large international events such as the World Cup and the Olympics as a tool to do so.”

Chinese President Xi Jinping, a football fan, encouraged Chinese companies to support the World Cup. According to his wishes, China has been investing money in various football-related projects.

FIFA is keeping a close watch on China’s football frenzy. Last year, when Qatar, host of the 2022 World Cup, faced a crisis due to a blockade by Middle Eastern powers, including Saudi Arabia and Egypt, FIFA Chairman Gianni Infantino met with former President Hu Jintao during a visit to China. It was said that they discussed hosting the World Cup.

It is widely speculated that China will bid to host the World Cup in 2030.

In order to achieve the dream of becoming a football powerhouse, the Chinese Football Association’s action plan for 2020 wants the Chinese national soccer team to raise its FIFA ranking to 70th place by that year. China is currently ranked 75th in the FIFA rankings.