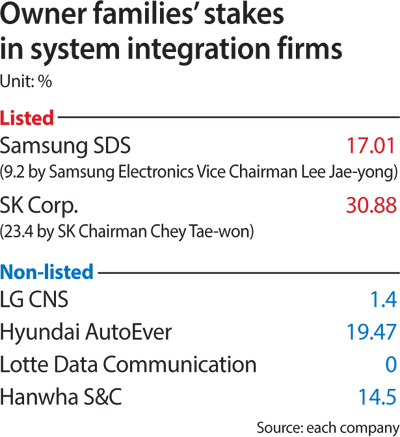 Kim Sang-jo, the head of Korea’s antitrust watchdog, stirred the fury of shareholders and conglomerates alike by demanding chaebol families get rid of stakes in affiliates that unfairly benefit them. A week after Kim’s comments, his critics still aren’t backing down on their argument that the Fair Trade Commission chairman is overstepping the law.

“It would be desirable for controlling family members to own stakes in only their core businesses,” he said. “Although there are no legal grounds to force them to sell off their stake, they will be subject to a probe and sanctions from the FTC [if they refuse to follow my advice].”

The next day, shares of Samsung SDS plunged 14 percent to 196,500 won ($177.61), slashing its Kospi market capitalization by 2.3 trillion won. Samsung’s IT arm was hit the hardest because Kim, a former anti-chaebol activist, has been demanding governance reform at Samsung.

A group of minority shareholders did not sit idly by as their investments soured, and sent an official letter to the FTC chief on Monday demanding answers on specific issues.

They asked Kim to give criteria for differentiating core and non-core affiliates; legal grounds for demanding controlling families sell stakes in non-core affiliates; compensation for their losses caused by his remarks; and legal justification for his proposed investigations of families that refuse to follow his orders.

“His remarks are above the law, and are no different than public blackmail,” said the group of minority shareholders in a statement. “If he does not come up with answers and countermeasures immediately, we will mobilize every possible means, including a lawsuit.”

Another shareholder wrote on the Blue House’s petition site that “core- and non-core businesses change incessantly in this era of global competition,” adding that “chaebol reform can never succeed when the FTC head maintains an academic perspective he developed long ago and considers chaebol to be evil entities.”

On Tuesday, Kim rolled back his statements during a keynote speech about the FTC’s accomplishments and goals at the Korea Chamber of Commerce and Industry. Kim said he was specifically referring to “non-listed firms” when talking about non-core businesses on June 14.

“I took the examples of several business sectors, and I asked them [conglomerates] to explain the reasons for such businesses and why the controlling family members own stakes in them,” Kim said.

After his remarks, Samsung SDS shares rebounded by 5.37 percent on Tuesday and continued to grow on Wednesday to close 0.49 higher, at 207,000 won.

“We are already abiding by the Fair Trade Act, and imposing pressure on the family members to sell more of their stakes goes over the line,” said a chaebol insider.

“If the FTC really wants the controlling families of chaebol to get rid of their stakes, it should revise the related laws on ownership regulations or impose taxes,” said an executive at a major conglomerate.