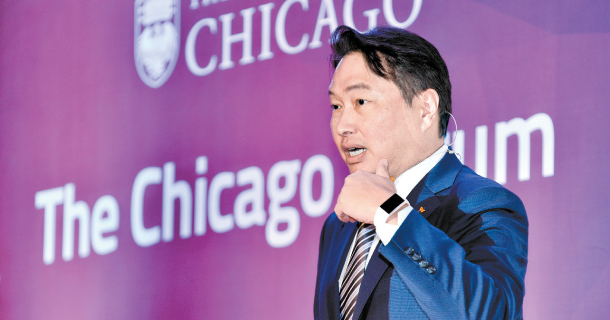 SK Group Chairman Chey Tae-won explains the group’s social value strategy at the Chicago Forum, held Wednesday in southern Seoul. Chey is the chair of the University of Chicago Alumni Association of Korea, which hosted the event. [SPARKLABS]

SK Group Chairman Chey Tae-won talked about why the private sector should focus on giving back to society at the Chicago Forum on Wednesday in southern Seoul.

The first Chicago Forum held in Korea was hosted by the local alumni association of the University of Chicago and organized by start-up accelerator SparkLabs. Chey gave a keynote speech at the forum, as he is the chair of the alumni association.

According to Chey, digital technologies have rapidly reshaped the business environment for firms, and corporate activities are now influenced by many more stakeholders than before, as the world has become more connected due to the internet.

“Now, customers don’t buy products just because they are cheap and good,” Chey added. “People are looking for additional value in products and services we provide.”

Chey defined social value as “the aggregate sum of a company’s contribution to solving social problems,” and said SK is pursuing a number of strategies to give back to communities. The first is delivering social value on top of its existing business models.

Chey used SK as an example. The mobile carrier has been mulling how to offer cheaper mobile phone plans for customers who think they’re paying too much. Chey said he let the carrier develop cheaper plans despite the cost to SK because it was something that increases the company’s value to consumers, which is social value.

“If we sacrifice our short-term profits for social value, I believe it will improve consumer trust, thus building a better business in the longer run,” Chey said.

Another strategy is sharing corporate assets owned by SK affiliates. The first example is SK Energy, which decided to give its gas stations a dual use as logistics hubs for city areas.

“As we decided to open up our gas station infrastructure, competitor [GS Caltex] also offered to follow suit,” Chey said. He said if more companies decide to follow suit, SK will be able to create a social phenomenon, changing Korea’s business environment.