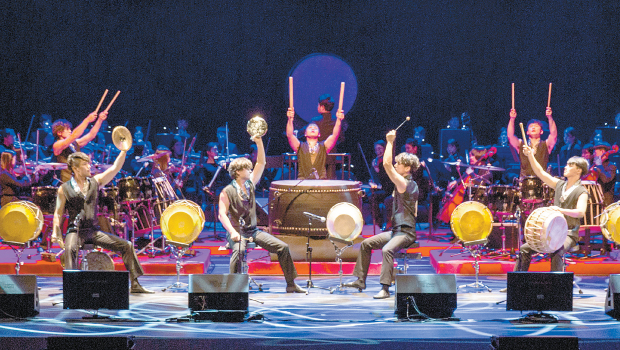 SEOGWIPO, Jeju Island - For 361 days of the year, the Haevichi Hotel & Resort on the southeastern coast of Jeju is filled with families on vacation. But over four days this week, the resort turned into a festival of the arts. Performances were staged in different corners of the hotel including the outdoor garden and even the lobby. The underground function rooms became a convention center housing dozens of booths set up by Korea’s performing arts groups.

The 11th edition of the Haevichi Arts Festival kicked off on Monday, gathering some 2,000 people from the performing arts world. It’s called a festival, but the annual event is also a networking platform for Korea’s performing arts centers and groups organized by the Korean Cultural & Arts Centers Association, an affiliate of the Ministry of Culture, Sports and Tourism. One of the main features of the festival is the Art Market, where booths are set up by performing arts groups of diverse genres, each promoting their repertoires to officials of art centers looking for acts to fill their annual calendars.

Roh Jae-cheon, CEO of the Gangdong Arts Center, said he vacationed at the Haevichi Hotel & Resort with his family in April and came back this week for the festival. 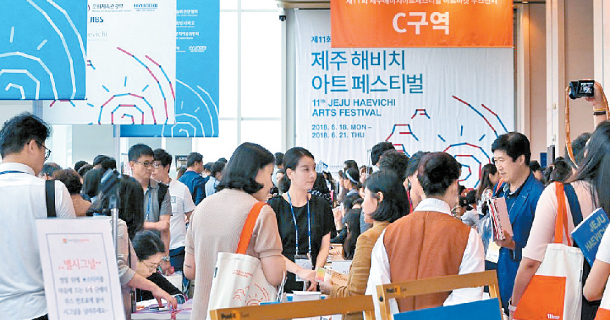 About 180 performing arts groups have set up booths to promote themselves at the festival’s Art Market. [THE KOREAN CULTURAL & ARTS CENTERS ASSOCIATION]

“I visit every year to mingle and network, but this year I came with a specific goal,” he said, “which is to look for gugak (traditional Korean music) groups that will be suitable for our arts center.”

Starting this year, the Gangdong Arts Center in eastern Seoul will have a weekly gugak matinee at 11 a.m. on Tuesdays.

There are more than 1,000 performing arts groups in Korea, and among them, 180 groups set up booths at the festival, which is 30 more than last year.

“Due to space limitations, we can’t accept all groups that apply,” said Lee Jong-hyun a spokesperson for the Korean Cultural & Arts Centers Association. “It’s a first-come-first-served system. We usually open up applications in January, and this year, the spaces filled up within an hour.” 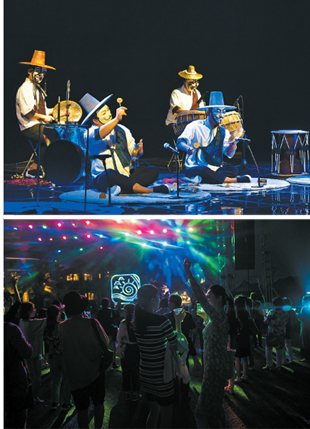 Some 25 performing arts groups were selected to perform. Those groups will also be supported by the Ministry of Culture for the next year to get bookings at art centers.

“As we are a small center located far from Seoul, it’s difficult to meet people and gather information about performing arts groups,” said an official from the Chilgok County Education and Culture Center in North Gyeongsang. “It’s good to see them face to face and hear what their work is about in person, as well as to see some great performances.”

On Tuesday, roundtable sessions were organized for different regions so that performing groups can take turns introducing themselves to art centers in regions they are interested in. Symposiums and discussion sessions on how to collaborate were also held as part of the festival.

The festival ends today, but a fringe festival will continue to be held throughout Jeju until Sunday. Visit www.jhaf.or.kr for more information.