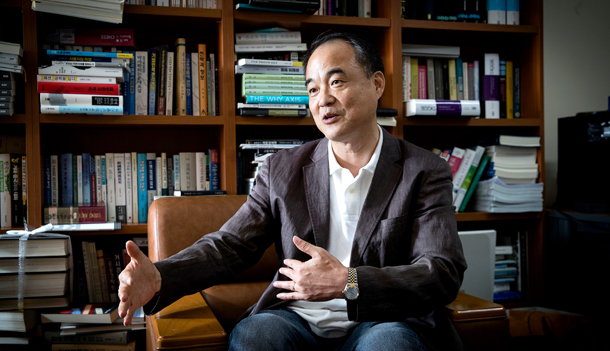 
President Moon Jae-in’s administration has been ramping up its so-called income-led growth drive, banking on higher spending power to boost the economy. Major parts of the policy include raising the minimum wage and lowering the maximum number of work hours in a week.

A drastic minimum wage hike already took place in January, and next month, a shorter work week — 52 hours instead of 68 for companies with more than 300 employees — will take effect. The new regulation has left many companies perplexed and scrambling to adjust to the rapid change. Small bus operators, for instance, are struggling to find more drivers to fill in the hours.

Workers are no better off than employers. With the decline in hours, their income is expected to fall. The people most vulnerable to the changes will have to seek part-time jobs to fill the gap. Despite the shock wave reverberating through the economy, the government is doubling down on the plan.

Kim Dae-il, president of the Korean Labor Economics Association and professor of economics at Seoul National University, spoke with the JoongAng Ilbo about the policy’s effects on the economy and labor market. Below are edited excerpts from the interview.

Q. What is your opinion about concerns that the policy’s side effects are bigger than expected?

A. The reduction in work hours this time around is different from the past. Previously, companies could still have their employees work more by paying them overtime.

But this government has made it completely illegal for people to work more than 52 hours per week. This means companies will have no choice but to hire more people, which will in turn increase labor costs.

At the end of the day, it will reduce demand for labor and cause inflation. This will lead to a decrease in jobs and income for regular consumers due to high inflation. It will have a very negative impact on the labor market.

The country’s research and development sector feels like it is in a state of emergency. Korea has about 40,000 private research centers. What’s your opinion on this issue?

It’s a very important one. For factory jobs, companies can simply switch to three shifts instead of two. The problem lies with workers in higher-quality jobs like research and development. It’s simply not possible for someone other than the person originally in charge of a project to take over. Some of them will have to work all night and then take the next day off. They need some flexibility in their work schedule, but the policy will rob them of this possibility completely and put a tremendous burden on research and development jobs.

Do you think high-quality jobs will move out of the country?

Truth be told, it’s the best setting to have R&D right next to factories. But there is a workforce shortage in the country, and foreigners are reluctant to come to Korea. It worries me that researchers and developers in Korea will also end up abroad in the near future.

This is not just a matter of cutting hours and losing jobs. It will ultimately have a dire effect on companies’ competitiveness. If it becomes more burdensome for Korean companies to do business, they will be at a disadvantage compared to Chinese companies that don’t have such a burden.

Will the new rule also cause confusion for regular office workers?

The Ministry of Employment and Labor presented a guideline, but it was nothing but a compilation of precedents and administrative interpretations. They are not enough to cover all situations. If the government implements the 52-hour work week as is, there should at least be a grace period. One year might not be enough to analyze all the cases and establish exceptions. How to realistically regulate all the different cases and how to punish each of them is also an issue.

Is this more problematic because it is also about Korea’s competitiveness in the global economy?

People say U.S. President Donald Trump is like a bully. But what he does is hit [foreign companies] with duties for the sake of U.S. companies and bullying countries like Korea into doing so. In comparison, our government is picking on domestic companies and holding them back. Increasing labor costs and taxes on Korean companies will ultimately degrade their global competitiveness. This will come back and bite, ultimately reducing the country’s gross domestic product.

What about small and medium-sized companies? They have until 2020 to adjust to the change.

The economy is a system where everything is tightly connected. Increasing costs for conglomerates will directly hit their suppliers. While the regulation will not take effect for these small and medium-sized companies, a fall in orders from large companies will cause a crisis and rob workers in those companies of their jobs or income. Applying the new law just on conglomerates will still have an ripple effect on small and medium-sized companies, including contractors.

Let’s look at this from the point of view of workers. Starting in July, about 3,700 workplaces will be affected by the reduction in work hours. Will it lead to a reduction in income as well?

This is not a matter of concern, but it is a reality. The government thinks decreasing hours will force companies to expand the number of workers from one to two, but what happens is that the income for one person is now split between two people. There is no change in the total amount of income.

The problem is that without any changes in productivity, a company has no reason to increase its hiring since this will only incur additional administrative costs. Hiring just one person will still be more productive and cost-effective.

Moon’s “income-led growth” drive is based on the International Labour Organization’s “wage-led growth” initiative. Is this a realistic idea?

The logic of income-led growth is that if you increase people’s wages, they will have more money at their disposal and spend more. They will buy products from companies, and companies will be able to sell more. This will make companies invest and hire more people to produce more, ultimately leading to growth.

And what is wage-led growth? Increasing a person’s income means increasing wages. These people will spend their money, and companies will expand their investment and hiring. This will help the economy to grow. Thus, increasing income to expand wages is the basic idea of income-led growth. Michal Kalecki, an economist, first proposed this first, and there are a few reports by the International Labour Organization about this idea.

Keynes was the first to propose an idea that is in essence the same as wage-led growth, but the theoretical foundation is completely different.

For Keynes, inducing growth by expanding wages is a way of riding out a recession. The idea was that during a recession, expanding government spending and lowering interest rates will make people to think their wages have gone up, which allows them to spend more. In return, companies will hire and invest more.

Keynesian policies will raise the growth rate of an economy for a year but won’t lead to long-term growth. Kalecki precisely mentioned this as well. This is not where we are at right now.

But the Blue House says the minimum wage increase has had a positive effect on 90 percent of Korean workers. What is your response?

The Blue House said Moon was referring to wage earners, but it’s a problem that the government excluded people who might have been laid off because of the minimum wage hike. If the minimum wage increase had a positive effect, it would have increased the wages of the bottom 10 percent. Why would the income of the top 10 percent go up? The minimum wage itself is a law to protect those in the bottom tier of earners, and if it’s unable to help them, the policy has failed.