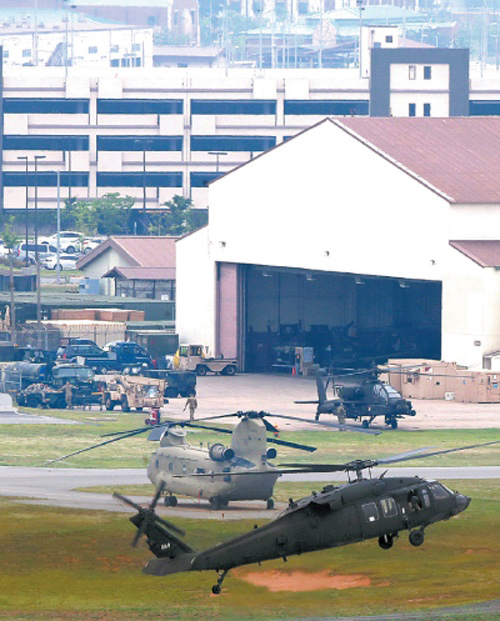 South Korea and the United States will suspend a major joint military exercise scheduled for August, Seoul’s Ministry of National Defense announced Tuesday, after U.S. President Donald Trump pledged that he would end “war games” in South Korea as long as progress was seen in denuclearization talks between Washington and Pyongyang.

Ministry spokesperson Choi Hyun-soo said the Freedom Guardian exercise won’t be held this summer - at least for now - but could be resumed if North Korea fails to carry out denuclearization measures and slacks off on talks with the United States.

Choi said Seoul expected Pyongyang to show a “reciprocal measure” for the suspension of the drill, but didn’t explain what that could be.

As for South Korea’s Ulchi exercise, which had been run alongside the joint Freedom Guardian exercise under the comprehensive term Ulchi Freedom Guardian, another Defense official said Seoul has yet to decide its fate, stressing it was solely up to South Korea to decide.

The Pentagon said in a statement issued the same day that the U.S. military has “suspended all planning” for the “defensive” Freedom Guardian drill in concert with South Korea.

“No decisions on subsequent war games have been made,” said Dana W. White, chief spokesperson for the Pentagon, apparently referring to other major drills between the allies. “We are still coordinating additional actions.”

But multiple South Korean government sources who spoke with the JoongAng Ilbo on Tuesday said Washington unilaterally informed Seoul last week that all joint military exercises will be suspended during the period of detente.

U.S. Secretary of State Mike Pompeo was said to have relayed the news to officials in Seoul during his visit to South Korea last Wednesday and Thursday.

That could mean the allies will call off their Key Resolve and Foal Eagle exercises, which are usually held every spring, next year if Pyongyang manages to stay on good terms with the Trump White House.

Last year, Ulchi Freedom Guardian ran for 11 days from Aug. 21 and involved some 17,500 American service members, including 3,000 from off the peninsula, and 50,000 South Korean troops.

The computer-simulated exercise is designed to enhance the allies’ readiness to protect the South from North Korean aggression.

North Korea has long denounced joint military drills between Seoul and Washington as rehearsals for invasion, though the allies consistently refuted the accusation and stressed the exercises’ defensive nature.

But Trump threw cold water on that line last week.

After his summit with North Korean leader Kim Jong-un on June 12 in Singapore, Trump told reporters that he would stop the “war games”- a description that aligns with North Korea’s stance - because they were costly, provocative and inappropriate at a time when the United States and North Korea was negotiating a deal.

“They’re tremendously expensive,” Trump lamented. “The amount of money that we spend on that is incredible. And South Korea contributes, but not 100 percent, which is certainly a subject we have to talk to them about.”

Asked what the North would give in return, Trump said he secured the commitment that the regime will destroy a missile engine testing site, though he said the agreement was shared verbally between him and Kim.

The Pentagon and South Korean government apparently weren’t given a heads-up on Trump’s decision to call off the Freedom Guardian exercise, for which preparations were far underway.

Shortly after he made the remarks, the South’s Defense Ministry said it was in the process of analyzing the exact meaning and intent of the White House chief. The U.S. command in South Korea said it had received no guidance on the cessation of training exercises.

The suspension of Freedom Guardian marks another major concession to the North, after the U.S. and South Korea postponed the Foal Eagle and Key Resolve exercises early this year until after the PyeongChang Winter Olympic Games, and scaled them down.

That led to a rare rapprochement between the two Koreas, the North’s participation in the Games and ultimately the Singapore summit.

Song Min-soon, South Korea’s former foreign minister under President Roh Moo-hyun, who served as Seoul’s point man in the six-party talks, hailed the suspension of the Freedom Guardian drill, saying it was about time the allies reciprocated Pyongyang’s halt of its missile and nuclear tests and the demolition of the Punggye-ri nuclear test site last month.

Kim Hyun-wook, a professor of American studies at the Korea National Diplomatic Academy, raised the fear that suspending joint drills might give the U.S. leeway to discuss the withdrawal of American troops from South Korea, which Trump said last week he wanted to do “at some point.”