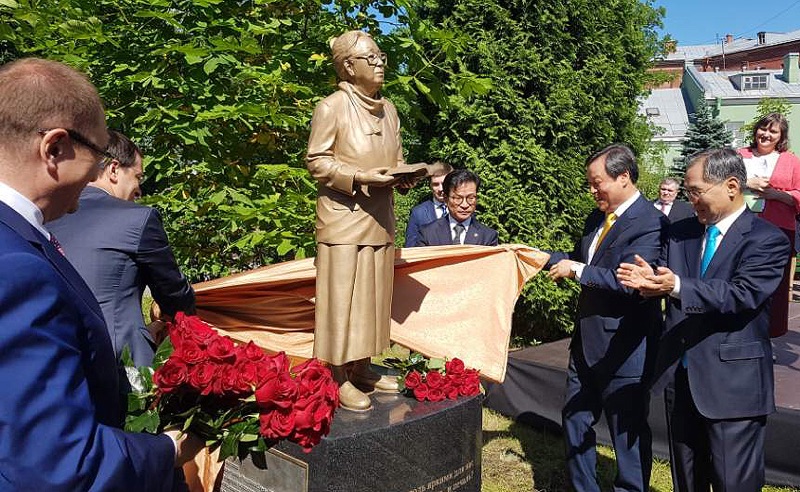 A statue of Korean novelist Pak Kyongni is unveiled on Wednesday on the campus of Saint Petersburg State University in Russia. [YONHAP]

A bronze statue of the great Korean novelist Pak Kyongni, author of the historical epic series “Land (Toji),” has been dedicated at a Russian university.

The statue was unveiled in a ceremony on Wednesday (Russia time) on the campus of Saint Petersburg State University in Saint Petersburg by the Korea-Russia Dialogue, a civilian dialogue channel between the two countries.

It is the oldest and one of the largest universities in Russia.

On hand at the ceremony were about 40 Korean and Russian officials, including Do Jong-whan, Korea’s minister of culture, sports and tourism, and his Russian counterpart Vladimir Medinsky and Nikolay Kropachev, president of the university.

The project has been in the works since 2013 when the forum built a bronze statue of the great Russian poet Alexander Pushkin in front of the Lotte Hotel in central Seoul at the request of the Russian Writers’ Union to help further relations between the two countries.

“It’s very impressive to see the statue of Pak Kyongni being unveiled in Saint Petersburg, Russia’s top academic and cultural city,” said Do during the ceremony on the scene. “As Pushkin is revered as a national poet in Russia, Koreans respect and are proud of Pak.”

Do then expressed hope that the event will help promote exchanges between South Korea and Russia and deepen understanding and love of each other’s culture and arts.

Inscribed on the lower part of the structure was the last sentence of Pak’s famous poem “Life” written in the Korean and Russian languages with a brief introduction on the writer.

Also attending the ceremony were Woo Yoon-keun, Korean ambassador to Russia; Lee Kyu-hyung, chairman of the coordinating committee of the Korea-Russia Dialogue and Kim Young-joo, Pak’s only daughter and chair of the “Toji cultural foundation.”