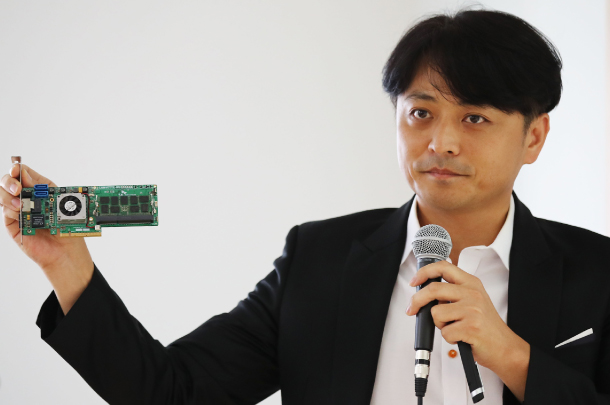 Chung Moo-kyoung, leader of the New Computing Lab at SK Telecom, introduces an AI accelerator the mobile carrier developed at a press briefing on Thursday. [YONHAP]

SK Telecom on Thursday unveiled a palm-sized chip designed to boost the computing speed of its artificial intelligence service, which is currently being used for the carrier’s Nugu voice assistant, by up to 20 times.

A number of the so-called AI acceleration solutions will be installed in the data center of the top carrier’s Nugu platform, equivalent to Apple’s Siri or Samsung Electronics’ Bixby. That way, SK Telecom could pump up its AI service capacity by five times and reduce latency without having to install extra servers, thus saving money.

Nugu is used in a smart speaker as well as SK Telecom’s T map navigation app. The company refused to disclose exactly when the chips will be applied.

According to Chung Moo-kyoung, leader of the New Computing Lab at SK Telecom, the mobile operator began developing the AI accelerator two years ago expecting the number of its AI users to increase dramatically in the long term.

The number of monthly active users of Nugu has shown drastic increases recently - from 110,000 last August to 3 million in March - and are expected to continue rising as AI services are applied to finance, security, shopping, internet searches and self-driving vehicles.

“Given that data transmission speeds will get even faster with the commercialization of the next-generation 5G connectivity, more data should be taken care of by the data center,” Chung said in a press briefing.

“As AI services will get even more complicated over time, the current system will barely be able to keep up and offer quality services.”

SK Telecom is the first domestic company to have deployed such a solution to a commercialized service. AI chipsets have upbeat growth potential. According to a March report from U.S. market information provider Tractica, global shipments of AI chipsets that were worth $1.6 billion in 2017 are forecast to rise to as much as $66.3 billion by 2025.

“AI applications demand higher performance and lower power,” said Tractica’s principal analyst Anand Joshi. “The world’s top semiconductor companies as well as a number of start-ups have jumped into the race to meet these demands.”

Outside of Korea, Nvidia, the No. 1 graphics processing units producer, Intel and Google are the top three players in AI accelerators. Many other noted tech firms have jumped on the bandwagon including Amazon, Microsoft, Facebook, Alibaba, Huawei and Baidu.

Chung went on to explain the two focuses of the AI accelerator when it comes to computing data: so-called deep learning training and inference. The share of training in the current form of AI services is bigger but inference will gain in importance as AI technologies mature and become more common, he said.

Given that prediction, SK Telecom will focus on the stage of inference and has set a goal of coming up with a 3.0 version of the AI processor by 2020. That will enable more natural conversation with users.