The division of Korea is seen by many as a tragic part of the history of the peninsula. But putting the tragedy aside, many filmmakers over the past few decades have used the unique geopolitical situation to create distinct stories about the tensions between the two Koreas. This year is no exception, as a slate of films depicting different elements of the relationship between the North and the South are set to hit theaters in upcoming months.

With the political relationship between South and North Korea undergoing major changes following the historic summits between President Moon Jae-in and North Korean leader Kim Jong-un in April and May, films with North Korean plot elements are receiving more attention than ever. While some filmmakers have mixed feelings about how the rapidly changing politics of the region may affect the performance of their movies, others are expecting to see a positive boost at the box office.

Films that tell stories about the tense relationship between the two countries have spanned genres ranging from heartwarming comedy (“Joint Security Area”), to action-packed blockbuster (“The Berlin File”), to merciless crime thriller (“V.I.P.”) and sports drama (“Korea”). Though not all of them succeeded in the box office, these movies usually catch the interest of those who are curious about the mysteries involving North Korea. The fact that these films frequently have large budgets and are able to cast high-profile actors prove their box office viability.

Kang Dong-won from “Inrang.” These upcoming releases are all based on the tense relationship between South and North Korea. [WARNER BROS. KOREA]

Thanks to their popularity, at least two to three features involving North Korean elements arrive in theaters each year. In 2017, major distributors like Next Entertainment World, CJ Entertainment and Warner Bros. Korea released “Steel Rain,” a film about a former North Korean intelligence agent and a senior member of the South Korean security service conducting a secret mission to prevent the breakout of a nuclear war on the peninsula; “Confidential Assignment,” an action flick about the friendship that blooms between South Korean and North Korean detectives while working together; and “V.I.P.,” about a South Korean intelligence agent, police detective and a North Korean officer colliding in their efforts to catch a North Korean serial killer who crossed the border.

This year, at least four movies based on the tensions on the Korean Peninsula are set for release.

On July 25, “Inrang” (working title) is an adaptation of the Japanese animated movie, “The Wolf Brigade” (1999). Starring Kang Dong-won, Han Hyo-joo and Jung Woo-sung, the Korean adaptation is set in 2029, a period after the two Koreas have declared preparation for unification. But problems arise as an anti-reunification terrorist group emerges, and South Korean police launch a special unit to stop them.

“While writing the script, unification seemed something [unbelievable] to the point of being something like sci-fi,” said director Kim Jee-woon during a press event on Monday. “I didn’t expect [the relationship between South Korea and North Korea] would progress so fast.”

“The movie is about the uncertainties happening on Korean peninsula,” said Jung, but he assured audiences not to worry about the chance of the plot turning into a reality. 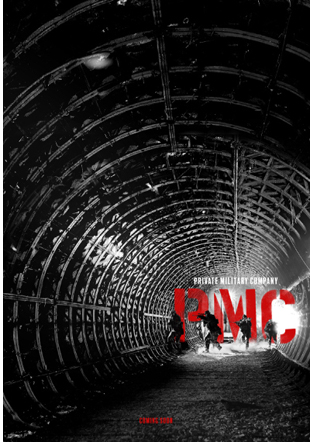 “PMC” depicts a military company’s efforts to rescue a captive in an underground bunker amid high tensions. [CJ ENTERTAINMENT]

Amongst these concerns regarding the widening gap between reality and the movie, “The Spy Gone North” is looking to get a boost thanks to improving relations between the countries.

Set in the mid-1990s, the movie follows a South Korean spy who infiltrates the North to get intelligence on the country’s nuclear weapons plans. The film stars Hwang Jung-min, Lee Sung-min and Cho Jin-woong.

Another CJ feature, “PMC,” scheduled for release this winter, centers on a private military company that needs to rescue someone held in an underground bunker during times of highly charged tensions between South and North Korea. Actors Ha Jung-woo and Lee Sun-kyun will appear in the movie.

Another film taking place during times of a tense relationship between the South and the North is “Swing Kids.” The movie is a light drama about a North Korean soldier captured in the South who overcomes ideological conflicts through tap dancing and it is set in 1951, during the Korean War (1950-53).